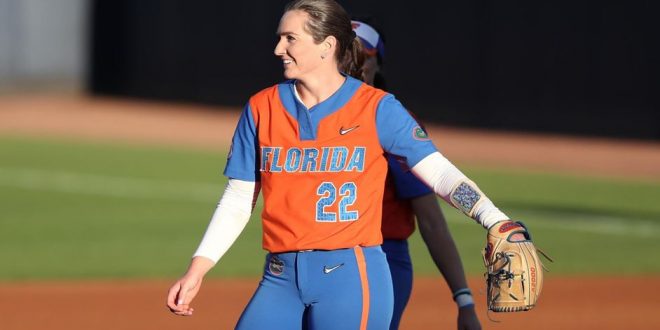 After dropping the first game of the series, Gators Softball won two straight to beat Auburn 2-1 in the weekend series. This was the second SEC road series win for Florida in 2022.

The first game of the weekend series came Friday. Certainly, Florida struggled to take advantage of its six hits and lost by a score of 3-1.

Both teams failed to tally a hit in the first inning. At the top of the second, Florida was able to get two players on base but failed to score. Then, Reagan Walsh had the first hit of the game but was out at second base. Although Emily Wilkie and Kendra Falby both got on base, they weren’t able to find their way past second base.

Auburn notched their first hit at the bottom of the inning but again could not score. In the bottom of the third inning, Florida avoided a disaster. Auburn found itself with bases loaded, but two straight strikeouts from Elizabeth Hightower helped the team escape the inning.

In the bottom of the fourth, the team was finally able to get on the board when Auburn scored two runs. Aspyn Godwin hit a home run that scored another runner and put the team up by two.

The Tigers kept the momentum going when Nelia Peralta also hit a home run. Florida answered at the top of the sixth with a run of its own. The sac fly by Cheyenne Lindsey scored Hannah Adams and put the Gators within two runs.

Hightower ended the inning swiftly and only needed three at-bats to do so. At the top of the seventh, Florida had an opportunity to win the game. The team registered three hits and had the bases loaded with Adams and Charla Echols on deck. Both players struck out swinging and the Tigers has control of the series.

Final from Auburn. We'll look to even the series tomorrow at 3 PM (ET)

The Gators were on fire in the next game when the teams played again on Saturday. Florida had 13 hits on the way to a 7-6 victory. Despite having nine more hits than the home team, the Gators only managed to buy one run with a score of 7-6.

Adams and Wilkie got the team on the board quickly, scoring two runs in the first inning. However, Makayla Packer tied it up in the third inning when she hit a home run and scored another.

Florida created some separation in the fourth inning behind its 4 runs in that inning alone. Sam Roe, Falby, Adams and Walsh all got involved and scored runs of their own.

The Gators kept their feet on the gas and added a run when Falby stole second and scored on an error. Auburn had an answer of its own when Peralta scored two runs and brought the game within three at the bottom of the inning. However, Auburn came up just short scoring two runs in the bottom of the seventh and ending the game down 7-6.

Behind a great performance by Hightower, Florida won its second straight and stole the series from Auburn. Hightower pitched the whole game, only giving up three hits and no runs with five strikeouts.

The game was rather quiet through the first four innings and the first hit was not registered until the third inning. There were only three hits between both teams until the fifth inning when the Gators finally scored.

Katie Kistler scored Lindsey with a single to right field, and the team had the lead. Skylar Wallace and Adams both scored in the top of the sixth to extend the lead for the team.

Hightower finished the game strongly and did not give up another hit. The Gators won the game 3-0.

After the 2-1 series win, Gators Softball now sits at 30-6 on the season and are ranked No. 7 in the country. The team’s only series loss this year came against Tennessee.

It has a game scheduled Wednesday against in-state rival Florida State before it continues SEC play this weekend. The team has a three-game series at home against Alabama from Saturday to Monday.