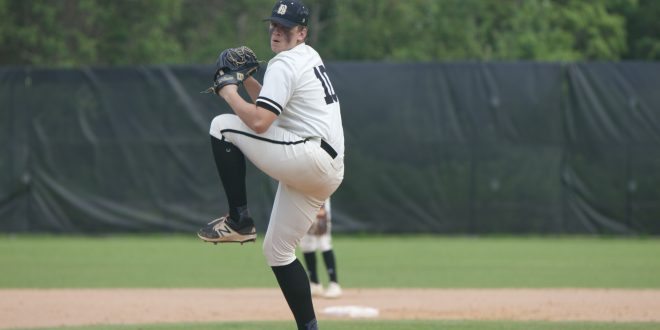 #10 Austin Cordozo fires a pitch during the second inning of Wednesday’s game. Photo by Ellie Shreve.

The Bobcats were able to get the bats going early, recording all six of their runs in the first three innings of the game. The Bobcats recorded 12 hits in this heavyweight district matchup, with seven different players recording at least one. Sia Wilson drove in two runs off of three hits, while Cooper Collins and Anthony Wilkie each recorded two hits and two runs.

While the Bobcats performed well at the plate in this game, it was Austin Cardozo’s pitching that truly stole the show. The sophomore impressed on the mound, allowing only two hits and recording seven strikeouts through six innings pitched.

In their previous matchup, the Leon Lions were able to get things going quickly offensively, and Buchholz could not answer until late in the game. The Bobcats knew that in order to win this matchup, they would have to score runs early and often.

After Cardozo made quick work of Leon in the top half of the first inning, Buchholz came out firing on all cylinders offensively. Cooper Collins got the party started with a base hit to right field. After an Anthony Wilkie double to left field and a Ryan McCraken RBI base hit, the Bobcats were on the board.

Ryan McCracken with an RBI single through the gap. @Bobcat_Baseball is up 1-0 in the bottom of the 1st. pic.twitter.com/cpwMkzjRTU

An avalanche in scoring ensued after Ewan Parker committed a balk with the bases loaded to drive in another run. After a sacrifice bunt from Sia Wilson, the Bobcats lead 3-0 at the end of the first inning.

Executing On Both Sides

As the game continued on, Austin Cardozo continued to have his way with the Leon Lions’ lineup. The underclassman recorded his fourth strikeout of the game to end inning number two. After another quick top half of the inning, Cardozo had logged five strikeouts and zero hits through three innings pitched.

While Cardozo continued to shine, the Bobcats did not let up offensively. In the third inning, Anthony Wilkie smacked his second double of the game to right field to put two runners in scoring position. In the following at-bat, Noah Hayse drove in both of them on a base hit to left field.

Buchholz is up 5-0 in the bottom of the 3rd. pic.twitter.com/3dl1IhrtBx

After another run was brought in off of a double by Sia Wilson, the score at the end of the third inning was 6-0 in favor of Buchholz.

After a strong offensive showcase by Buchholz through three innings, the Lions were able to keep the Bobcat bats in check for the remainder of the game. In spite of the fact that the Lions prevented them from scoring any more runs, the Bobcats finished the game with 12 hits.

While Cardozo continued to dazzle on the mound, a pair of errors by the Buchholz infield resulted in two runs for the Lions in the fourth inning. In spite of this, Cardozo remained solid and kept the Lions quiet offensively. Through five innings pitched, he allowed only one hit and recorded six strikeouts.

After Cardozo quickly retired the Lions in the sixth inning, the score was 6-2 in favor of Buchholz.

After an impressive performance from the sophomore, the Bobcats elected to hand things over to their closer, Joaquin Gardner. While fans in attendance were eager to see the game put away, the Lions didn’t make things easy for the freshman pitcher. After an RBI double by Eduardo Castillo, a sacrifice groundout and a base hit to right field, the score was 6-5 with only one out recorded.

After a game in which Buchholz had dominated in all phases, the Lions cut the lead down to one and made this a ballgame. With the tying runner on first, the game was ended on a ground ball to second base that resulted in a double play.

The Bobcats out-claw the Leon Tigers 6-5 in a district matchup. Buchholz starting pitcher Austin Cardozo shares what was working for him on the mound and the confidence the offense gave him with 6 runs of support. @Bobcat_Baseball @AustinCardozo13 @ThePrepZone @ESPNGainesville pic.twitter.com/M6jglcQaNg

The Buchholz Bobcats will continue their three-game home-stand when they take on The Villages Charter High School on Thursday night at 7:00 p.m.