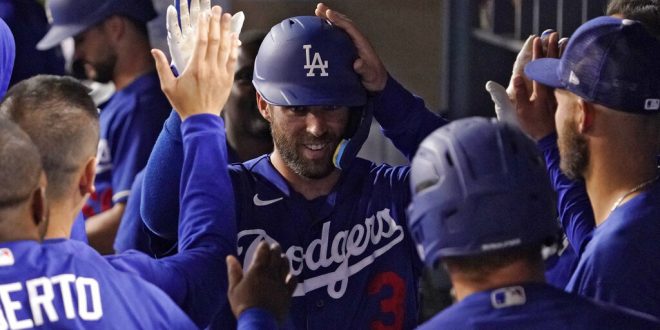 Los Angeles Dodgers' Chris Taylor is congratulated by teammates in the dugout after hitting a two-run home run during the seventh inning of a spring training baseball game against the Los Angeles Angels Tuesday, April 5, 2022, in Los Angeles. (AP Photo/Mark J. Terrill)

After a long offseason, Major League Baseball opening day is on Thursday. Here is a look at the heavy-hitting NL West.

The Dodgers enter the 2022 MLB season as the favorites to win the World Series.

With one of, if not, the biggest offseason signing, former Atlanta Brave Freddie Freeman will be lacing up for the Dodgers.

Breaking: Freddie Freeman and the Dodgers have agreed to terms on a six-year, $162 million deal, according to @kileymcd and @JeffPassan. pic.twitter.com/IQQ13JdsGY

The Dodgers ranked fourth in total homeruns in the 2021 season Freeman will definitely add to that total next season.

Even with the loss of Max Scherzer, the Dodgers re-signed major pitching assets in Clayton Kershaw, Julio Urias and Daniel Hudson. They also still have Trevor Bauer, David Price and Walker Buehler in the rotation and bullpen.

The Dodgers look to bounce back after an early exit at the hands of the Braves in the Championship series. They actually finished second in the NL West behind the Giants but beat them in the Division series.

L.A. is also forking out the most money in all of baseball this season as it has over $277 million in total payroll this year.

The Dodgers should be nothing short of exciting to watch in the 2022 season.

With the loss of Buster Posey to retirement and Kris Bryant signing with the Rockies, the Giants have some major holes to fill. They have already mad big strides in the bullpens to prepare for the 2022 campaign.

The Giants added Carlos Rodon, Alex Cobb and re-signed Alex Wood. They are a great supporting cast behind the Giants ace Logan Webb.

On top of the pitching additions, San Francisco also resigned Brandon Belt and added Joc Pederson to its Lineup.

The Giants had a lot of pop in their lineup as they were second in the MLB for home runs.

They did better than expected in the 2021 season as they finished at the top of the NL West with 107 wins. They also made it to the divisional round where they lost to the Dodgers. The Giants were ranked No. 25 in the power rankings in the beginning of that season.

The top concern right now for the Giants will be replacing the power they lost from Bryant and Posey.

The Padres were one of the biggest disappointments in the 2021 season.

San Diego reached the playoffs for the first time since 2006 in the 2020 season. It proceeded to fall apart in the 2021 campaign.

Fernando Tatis Jr. was injured for a majority of the year with shoulder injuries. The Dodger trading for Turner and Scherzer did not help the Padres either.

Team chemistry struggled as Tatis Jr. and Manny Machado ran into issues during the year as well.

It finished with a 79-83 overall record last year and third in the west.

The upcoming season for the Padres is also in the air as Tatis Jr. will have an injury during the start of the season.

Fernando Tatis Jr. fractured his wrist during the offseason, per @dennistlin

He will need surgery & could be out up to three months. pic.twitter.com/CaIaYHDcWa

This season however, with a healthy roster, the Padres could be a very intriguing team to watch out for.

The Colorado Rockies are still trying to put all of the pieces together. Last season, they didn’t find any of those pieces.

Last season they finished with a 74-87 record and finished fourth in the west.

The Rockies lost a key role in their line-up in Trevor Story, but made some moves and signed Bryant and Jose Iglesias. They will be great support behind veteran Rockie Charlie Blackmon.

Kris Bryant is signing with the Rockies, per @JonHeyman pic.twitter.com/KlYQeFRuzn

Colorado desperately needs to build up its bullpen for the season. The Rockies were 24th in team ERA last season and haven’t made any notable moves thus far.

Nothing is really looking up for the Rockies thus far, they have given a lot away the last couple of years and haven’t seemed to get anything in return. If there is any positive for the Rockies, it’s that it doesn’t seem to be getting any worse.

After the 52-110 season the Diamondbacks had last year and finishing last in their division, the only direction is up for them.

Pitching was their biggest struggle last year with a 5.12 ERA through the whole season.

The veteran starter Madison Bumgarner is looking for some much needed help and might just get it from prospects coming up from the minor leagues.

Diamondbacks General Manager Mike Hazen said other areas of focus are starting pitching and right-handed power in the lineup.

Arizona has not signed any big names as of yet but look for it to make some moves as the season moves on.

It's all coming into focus.