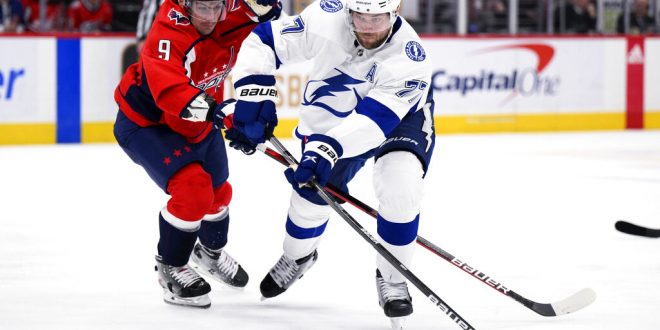 Four Points from Carlson Get Capitals Past Lightning

The Tampa Bay Lightning took the ice against the Washington Capitals on Wednesday. After a stellar day from Capitals defenseman John Carlson, Washington secured the 4-3 win, the third straight loss for the Lightning.

The opening period was full of offense for both teams.

Just five minutes into the game, Washington’s Conor Sheary secured the puck on the Lightning end. He turned and passed it back to Carlson who quickly moved toward goal before putting it across the face of the net and in Martin Fehervary’s possession. Fehervary put the puck away to open the scoring for the Capitals.

It wouldn’t take long for the Capitals to follow up their opening goal and double the lead.

A two-minute penalty for Tampa Bay’s Ross Colton left Washington on the powerplay. With just seconds left in their one-man advantage, Carlson launched a missile from just inside the Lightning zone to put the Capitals up 2-0.

The Bolts would get one back halfway through the first period.

A failed clearance by Washington and a goalie without his stick left Nikita Kucherov wide open in the middle of the chaos. Kucherov buried the shot to split the deficit in half.

Five minutes later, Alex Ovechkin got his name on the scoresheet.

The Capitals winger reached 1,400 career points with his 43rd goal of the season, becoming the 21st player in NHL history to reach the point mark. He also moved into third place for goals in a season over the age of 36. He’s just one goal away from second place.

Tampa Bay quickly responded to the Ovechkin goal with one of their own.

With three and a half minutes left in the first period — yes, this is still the opening period — Nicholas Paul found the puck underneath him. Paul turned to goal and cut toward the center of the ice before slapping a laser into the back of the net. The goal brought the Lightning back within one point.

With the first period finally over and the Capitals up 3-2, the game finally began to slow down.

Washington doubled their lead in the second period with a second goal from Carlson. With two goals and two assists, Carlson’s four points tied a career-high. He also tied the second-highest point total in a game for a defenseman this season.

Tampa Bay would get one back with a goal in the third period, but it was not enough to complete any comeback.

The Washington Capitals got the win 4-3.

Looking Ahead at the Lightning

The Tampa Bay Lightning (43-20-7) sit sixth in the Eastern Conference with a game against the fifth-place Bruins on Friday. The Washington Capitals (38-22-10) are currently secure at the No. 8 spot in the east. They’ll take a trip to Pittsburgh for a matchup with the Penguins on Saturday.

“Right now, we’re just missing in some areas. The boys, they battled … there wasn’t quit in them, we just fell one short.”#TBLvsWSH

Chris Will is a second-year journalism student with a focus in sports and media. Originally from the Fort Lauderdale area, Will is now the beat reporter for Florida Gymnastics and covers all things sports in Gainesville.
@_Chris_Will_
Previous Austin Cardozo Deals as Buchholz High School Boys’ Baseball Defeats Leon 6-5
Next Oak Hall Back On Track With Commanding Win Over St. Francis