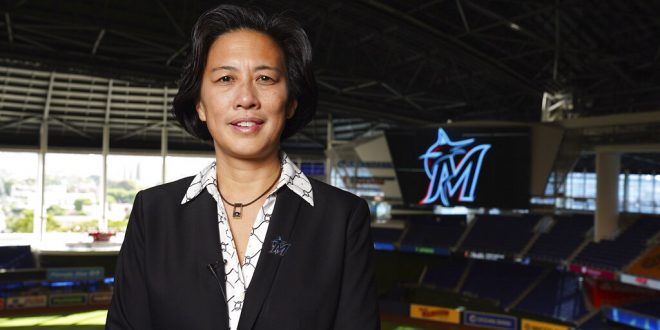 In this photo provided by the Miami Marlins, new Miami Marlins general manager Kim Ng poses for a photo at Marlins Park stadium before being introduced during a virtual news conference, Monday, Nov. 16, 2020, in Miami. Ng discussed her climb to become the first female GM in the four major North American professional sports leagues. (Joseph Guzy/Miami Marlins via AP)

In 2020, the Miami Marlins made the playoffs for the first time in 17 years.

Now, after retooling in the offseason, the Marlins are ready to get back on track.

The Miami Marlins made many offseason changes to their front office, coaching and personnel.

Beginning with management, Hall of Famer Derek Jeter stepped down as the team’s CEO. In short, the move came as a surprise to most.

Regarding the staff, they hired Marcus Thames as a major league hitting coach.

Marcus Thames has a lot of connections in Miami, aka Yankees South. Particularly with Marlins VP of Scouting and PD, Gary Denbo, who was one of Marcus’ first hitting coaches in pro ball. And James Rowson, the Marlins’ bench coach, is a close friend. https://t.co/GmadbTDSFI

Moreover, they hired Edwar González to be the assistant hitting coach and Al Pedrique to be the third base/infield coach.

The Marlins also added many key players to their roster.

Most prominently, they signed Avisail Garcia to a four-year $53 million deal. They also signed Jorge Soler to a three-year $36 million contract. Finally, they traded for Jacob Stallings and Joey Weddle.

Although they added new players, they also lost some others too. Promising catcher Jorge Alfaro was traded, along with relief pitcher Zach Thompson and prospect Kameron Misner.

Ultimately, the Marlins are hoping both their new coaches and players will get the team back on track.

The Miami Marlins enter the 2022 season optimistic. Specifically, the team is excited about many of their young and developing players.

The 2022 Aces Project: A panel of 20 execs, analysts and scouts rank MLB’s starting pitchers by tiers, from No. 1s to "guys."

The article categorizes Alcántara as someone who might call themselves an ace. In addition, it lists López along with Rodgers as awesome players.

Furthermore, the Marlins also have maturing talent in their lineup.

Jazz Chisholm is one of the most electrifying athletes in the sports. Heading into year three, the team is hopeful his production will take a big leap.

Ultimately, head coach Don Mattingly is enthusiastic about his teams chances this year.

The Miami Marlins will begin their season on April 8, at 4:35 p.m. on the road against the Giants in San Francisco.

William Silverman is a junior at the University of Florida from Philadelphia who is interested in pursuing a career in business, communications and journalism.
Previous Santa Fe High Baseball Dominates Trenton Tigers
Next UF Men’s Basketball Forward Tuongthach Gatkek Enters Transfer Portal