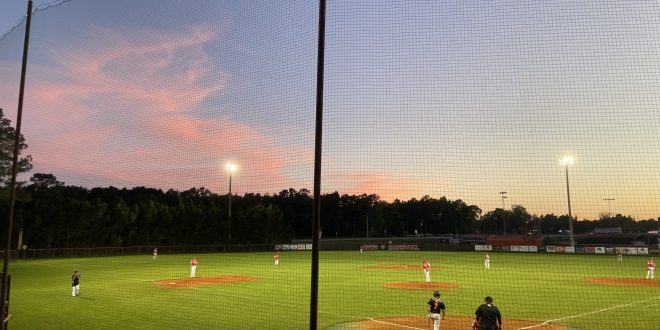 The Santa Fe Raiders defeated the Trenton Tigers in dominant fashion on Thursday night. Following a 4-run deficit, the Raiders rallied to secure a 16-6 victory over the Tigers.

Joey Malphurs started on the mound for Santa Fe, but gave up three runs in the first inning, forcing Coach Yeckring to make a change. Dawson Card took over the mound and helped the Raiders escape the inning without any more damage.

Colton Smith was the Tigers’ starting pitcher and tallied three quick outs to help the Tigers end the first inning without giving up any runs.

The miscues continued for Santa Fe throughout the second inning as well. Trenton’s Zaiden Bon scored off a wild Raider pitch, causing another Santa Fe pitching change. Dylan Evans took over pitching duties, immediately changing the narrative of the matchup.

In the middle of the second inning, Santa Fe senior Matthew Geelhoed gathered his teammates and delivered the pep talk they needed to snap out of their error-prone play.

As a result, the Raiders posted 5 runs in the second inning. The electric inning began with junior Zane Starling being walked. Junior Kyler Nowling sent a monster hit into center field to advance Starling to third. Starling reached home plate thanks to a Trenton error, and Dontrell Jenkins, pinch-running for Nowling, strolled home on a wild pitch.

The scoring didn’t stop there, as errors continued to plague the Tigers. Logan Summers, Dalton Dampier and Devante Mitchum contributed runs in the second inning as well. The Raiders entered the second inning down 4-0 but fought to take a 5-4 lead.

Both teams came up scoreless through the third and fourth innings. However, the Tigers broke out of their hitting slump and posted runs from Mason Craft and Maddox Gilliam in the fifth inning.

The Tigers left Jenkins stranded in scoring position to end the fifth inning.

The Raiders were down 6-5 entering the sixth inning. It did not take long for the Santa Fe bats to heat up. The Raiders took off running and never looked back.

Dampier pinch ran for Evans, and Devante Mitchum joined him on the base paths. Shortly after, Devan Mitchum dropped a ball deep in left field allowing both Dampier and Devante to score and give the Raiders the lead.

Devan Mitchum scored off a perfectly placed bunt by Conner Brown. Matthew Geelhoed and Conner Brown followed it up with runs off of Kyler Nowling’s hit to extend the Raiders’ lead 10-6.

Trenton had no answer for the Santa Fe offense as runs continued to be added to the scoreboard. The Raiders tallied 6 more runs to create a 10-run spread and conclude the game.

The Raiders have a busy schedule next week, as they face off against three opponents.

Shailey Klein is a first-year journalism major specializing in sports and media at UF.
@shaileyklein
Previous Masters at Augusta National Round 1 Recap
Next Miami Marlins Ready to Start Season