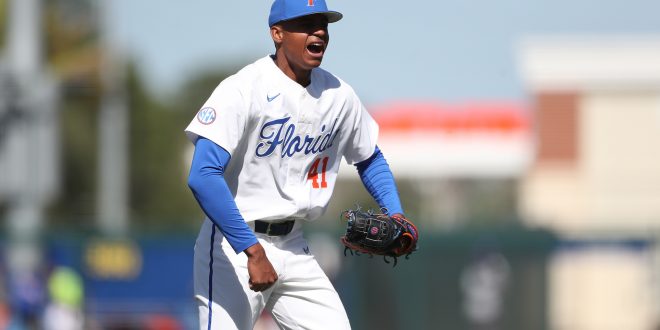 The Gators are coming off a big series win against No. 2 Arkansas this weekend. The win catapulted them back into the D1Baseball Top 25.

The No. 23 Gators travel to Tallahassee Tuesday to face Florida State in a sold out game. The Seminoles spent the first eight weeks of the season in the Top 20. However, since they moved into the top five two weeks ago, they have gone 2-6. They are now unranked for the first time this season after dropping their series versus Georgia Tech this past weekend.

Gators look to clinch the series

The Gators play three midweek games versus the Seminoles, but their first game got postponed due to weather and will be made up on May 17. This means their first meeting was Tuesday, March 29. The Gators won this matchup 6-3.

In that game the Gators delivered an 11-hit effort backed by errorless defense to defeat the Seminoles, who were ranked No. 5 at the time. A win Tuesday would ensure a series win and allow the Gators to go for the sweep when the two teams meet again in May.

For the Gators, Nick Pogue (1-1, 3.38 ERA) will be making his fourth start of the season. In his last outing versus Florida A&M he pitched three innings, retiring the first nine batters of the game while picking up three strikeouts.

For the Seminoles, Carson Montgomery (3-1, 3.89 ERA) will be starting. In his last outing versus Stetson, he struck out a career-high 13 batters.

The Gators have had pitching troubles mainly due to the youth in the bullpen. However, after this weekend’s series, the young pitchers proved they could come in big games and get the job done. Pogue will be looking to take advantage of a struggling but capable Florida State team.

For the Gators, the key to winning this game and being successful throughout the rest of the season is to find consistency. As their bullpen gets more experience, the pitching will continue to improve. The team hitting has been solid this season, but as head coach Kevin O’Sullivan pointed out, the team needs to be more engaged in the game.

Previous Play-In Preview: Nets-Cavs
Next Lightning look for a win against the Stars and a playoff spot