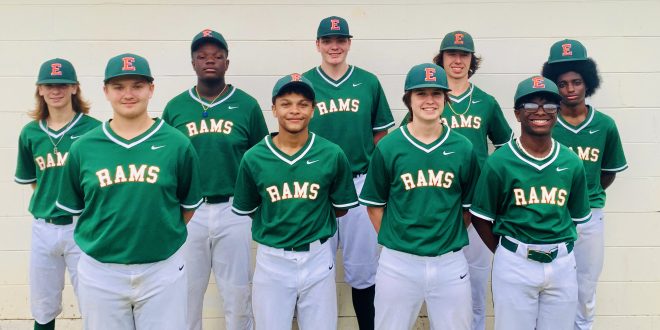 As the world battled through challenges and obstacles caused by the pandemic, the Eastside baseball team was hit significantly harder than some other programs. Head Coach Sean Dobbs was going into the 2021-2022 school year without even knowing whether or not he would have a complete team. Luckily, many new players stepped up. Still, the team had to find ways to adjust and develop an inexperienced, young core.

From the start of 2019, Dobbs was building a strong team to go into the 2020 season. Dobbs said the players of the team cultivated good chemistry. Unfortunately, when the 2020 season began, the team was troubled by some injuries. Little did they know, it would be the very last game of the season when Eastside got to play with their full squad.

Dobbs recalled how his team played at that last game in 2020 before Covid entered the picture.

“We came out right out the gate, we played a great game and everybody’s looking really optimistically into it,” said Dobbs. “We found out the next day that weren’t going to get to play for two weeks, and two weeks turned into four, and there was a whole season.”

In that season, Eastside had 8 seniors on the team. Dobbs realized that he was losing all these players that built a strong connection over the past year. Most tragic of all is that the 2020 team never got to truly experience their full strength on the field.

Eastside faced serious challenges adjusting from the 2019-2020 season as the JV team was not developed that year. With most of his players graduating, Dobbs had to build his team from scratch, even with players who had not played baseball before in their lives.

“We jumped into next year with a whole bunch of guys who hadn’t played. The next year we got some experience, but we were really playing about a year behind,” said Dobbs. “Then, this year we’re kind of getting back on track, but we still have about half of our players in their first year playing.”

Junior Miles Archer, who has been on the team since the 2020 season, talked about the obstacles he noticed moving into the 2021 season.

“We had to like rework a lot of things. A lot of people that had not previously been starting with our list were suddenly thrown into starting positions,” said Archer.“I think that just shook things up.”

Going into the 2022 season, Dobbs was not even sure if he would have enough players to have a team. Out of the 18 players on the current team, only 5 players remained from the previous season.

In hopes of building a team for the 2022 season, Dobbs talked about how they utilized a summer program to attract new players.

“It all started that summer, friends bringing out friends and it grew from there,” said Dobbs. “We just had a bunch of guys that fearlessly showed up and said, ‘hey! I want to play baseball’.”

Freshman Curtis Williams is one of the players who never played baseball in their lives before joining the Eastside team this year. Curtis had wanted to play baseball since middle school, but his school did not have a team. So, when he came to Eastside, he went to the tryouts and just stuck with the sport since then.

“There’s some good people out here [on the team], it’s a very good environment,” said Curtis. “I have lots of fun playing baseball. It’s my passion. I live to play.”

As simple as that, Dobbs built his team. Dobbs mentioned that this is the youngest team that he has ever coached at Eastside. Even after the start of this season, many players have just played around 10 baseball games in their lives. Even so, the team is packed with fresh and passionate players who are up for a challenge.

Dobbs has coached the Eastside team since his years as an undergraduate student. Now, he has been a head coach for Eastside for seven years. With all these years of coaching experience, he thought he had encountered every scenario that he could face. However, this year posed an unexpected challenge for him to coach the young team.

“When you come in playing at the high school level, there’s an assumption that most players know, at least this much about the game,” said Dobbs. “But this year I’ll get a question every once in a while that I have to sit back and think about it because no one’s ever asked me that question before.”

Dobbs said he had to rethink and reevaluate every single aspect of teaching baseball. With a minimal background of the game, Dobbs had to explain the sport through other sports as the players do not know baseball as a background reference. He had to find ways to link the sport to what they know.

Archer also pointed out some deeper hurdles that the coach and the team faced to train this young team.

“Our biggest challenge at the start and throughout the season is developing these players and having the younger side of them, said Archer. “I think that’s a lot to learn on them, especially from this year is like getting those first steps and developing them into better players.”

With a majority of the players being underclassmen and lack experience in playing baseball, the few still young, but veteran players had to take on a new role to help guide and lead the team.

Archer talked about some of the biggest changes that he and Junior Maui Schwartz, the only other player who has been on the team since the 2020 season, had encountered this year.

“As we get older and people graduated, then you become the leaders for the younger guys. Being the staple of what to be as a player and how to be hardworking is the role that Maui and I are becoming into,” Archer added.

Sophomore Zachary Bargar, who joined the team last season, talks about how he balances his new role as a leader and enjoying the game.

“I mean it’s definitely a bit more responsibility,” said Bargar. “I changed attitude-wise, to trying to lead the team, but still [be] out there to have fun.”

Dobbs stresses the importance of having these new leaders guide the team on the field during games.

“We’d be lost without them,” said Dobbs. “Baseball in the middle of the play is total chaos. And I rely on those guys out there to direct and get our less experienced players in the right spot and throw into the right base.”

“So they’d been invaluable in that. They’ve done a good job of it, and they’ve had a lot of patience with it too,” said Dobbs.

Both Archer and Barger see great potential for this young team to grow in the next few years. With only one senior on the team this year, the majority of the team will remain for the next season.

“Obviously starting off at young age, you won’t always crack out of the gate,” said Archer. “That’s not really expected of you as an underclassmen, but you can definitely see the talent and potential lying there. So, a lot of these players, all they need to do is grow the amount.”

“We have potential definitely, said Barger. “We just need to work at it, gain experience and not be so nervous out there.”

Dobbs definitely sees tons of good energy in this team and is ready to take them to the next level for this and even the next season. He ultimately hopes that the younger players would be able to realize the potential in themselves like the way Archer and Bargar see in them.

“For some of them sky’s the limit. I have like four players that can do standing backflip. There’s a lot of athleticism out here, said Dobbs. “It’s a matter of honing and focusing that athleticism.”

The Eastside team has definitely faced some drastic changes and difficult obstacles from the unexpected hit of the pandemic. However, Dobbs remained optimistic and was able to find ways to rebuild the team moving away from their troubles since the 2020 season. Currently, Eastside has a record of 3-7. They are looking to finish the season strong by getting as many wins and experiences for this young team as possible.

For this Eastside team, this season is just the beginning. It will be exciting to see how far this team can go in the next few years.