History of the XFL

The XFL is an American professional football league founded in 1999 and played its first season in 2001.

After the first week, ratings spiraled out of control due to the quality of the game play, on-air presentation and connection to the World Wrestling Federation.

The revival of the XFL was on its way but abruptly shut down mid-season due to COVID-19.

Now the league has plans to restart once again in the spring of 2023.

The XFL has not chosen the cities which the teams will be out of so the teams the coaches will be working with is unclear.

Quite possibly the biggest hire in the XFL off-season is former college head coach Bob Stoops.

Stoops has a terrific background in head coaching which is highlighted with the Oklahoma Sooners. As a Sooner, he had a 191-48 record with a national championship under his belt.

In 2020, he was the Dallas Renegades’ head coach before the season was canceled.

In 2021, Stoops also stepped in as interim head coach after the departure of Lincoln Riley and led the Sooners to a bowl win over Oregon.

The head coach told KWTV in back in 2019 that they are playing “real football,” and  he can only do so much golf in the spring time.

He was excited then, and he should be excited now.

Hines Ward is also on the list of new head coaches in the XFL.

Ward is a decorated former NFL Player. He also has experience as an offensive assistant for the New York Jets and a wide receivers coach for Florida Atlantic University.

flew a bit under the radar that Hines Ward interviewed for the Texans' HC job in January https://t.co/RDGYhIuQoI

The final of the three new head coaching hires is Rod Woodson.

Woodson is another Steeler with a decorated college and NFL career.

In college at Purdue Woodson was a three-time all Big-Ten as well as being a two-time All-American. In the NFL, he is a Super Bowl Champion, Defensive Player of the Year, six-time first team all-pro and 11-time pro bowler.

He also led the league in interceptions twice and holds the NFL record for most interceptions for touchdowns. He is also in the College and Pro Football Hall-of-Fame and a part of the Steelers Hall of Honor. 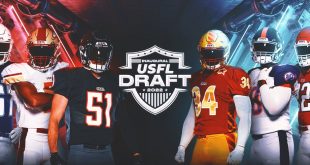