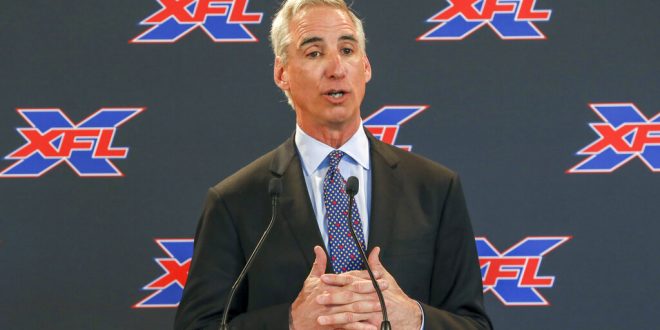 FILE - In this March 5, 2019, file photo, XFL Commissioner and CEO Oliver Luck speaks during a news conference at Raymond James Stadium in Tampa, Fla. The XFL filed for bankruptcy on Monday, April 13, 2020, likely spelling the end of the second iteration of the league. (Chris Urso/Tampa Bay Times via AP, File)

On April 9, McMahon’s Alpha Entertainment, which owns the XFL, fired Luck. Four days later, the XFL declared bankruptcy after having to suspend operations due to the coronavirus pandemic. The league had played just five weeks of games.

Beginning of the lawsuit

Oliver Luck filed the lawsuit three days after the league declared bankruptcy. The complaint says, “Despite fulfilling his obligations as Commissioner and CEO since May 30, 2018, Mr. Luck was wrongfully terminated by Alpha Entertainment LLC.”

Oliver Luck, the father of former Indianapolis Colts QB Andrew Luck, signed as the commissioner on a contract worth at least $20 million in May 2018. Specifically, the contract stipulated that he would receive the sum if terminated without cause.

Luck and McMahon go back and forth

“Oliver Luck’s services as Commissioner and CEO of the XFL were terminated by a letter sent to him on April 9, 2020, which explained the reasons for the termination,” McMahon’s lawyer, Jerry McDevitt claims.

Luck’s complaint specifically “disputes and rejects the allegations set forth in the Termination Letter.”

McDevitt promises a response which will refute Luck’s allegations.

Why is Luck going to McMahon?

Luck’s contract was not with McMahon personally; it was with Alpha Entertainment LLC (Alpha). Among other executives, Luck was missing from the XFL’s bankruptcy filing. Thus, the lawsuit mentions Alpha did not list Luck as a creditor, instead rejecting many executive contracts at the same time as filing their petition.

Sources say the bankruptcy court approved these rejections. As a result, this leaves McMahon as Luck’s only option for the lawsuit.

Darren Heitner, sports lawyer and founder of Heitner Legal, said in regard to the lawsuit, “Luck’s contract was not with McMahon personally. Will the court be convinced that McMahon’s pledge to provide his own money adds personal liability? Seems to be a stretch.”

The statement brings up how McMahon added millions of his own money to the funding of the XFL. Heitner, however, is doubtful that this makes McMahon personally liable for Luck’s contract.

Jensen Young is a journalism student at the University of Florida. He works as a sports writer for WRUF.com and is the voice of trendings on Wednesday mornings on the WRUF radio station.
@Jensen_Young9
Previous Joe Burrow ready for NFL Draft
Next Rules are Rules: Changes coming to NCAA football