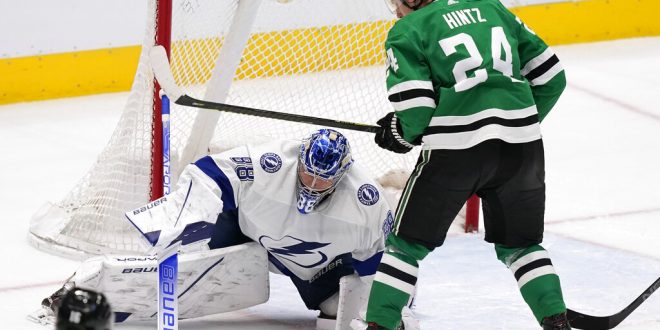 With the chance to clinch a playoff spot on Tuesday night, the Tampa Bay Lighting were not able to capitalize as they lost 1-0 to Dallas. With the loss, Tampa Bay will have to wait until Thursday for another attempt to clinch a postseason birth.

Couldn't get it done.

Goalies stole the show as Tampa Bay’s Andrei Vasilevskiy and Dallas’ Scott Wedgewood combined for 53 saves on 54 shots. Wedgewood, who finished with 25 saves, earned his fifth career shutout as a result of his performance.

On the other side, Vasilevskiy did his part with a game-high 28 saves on 29 shots.

However, neither team’s offense could find the back of the net for the majority of the game. Both teams went 0-for-3 on power play opportunities, and the games’ only goal came with less than five minutes to go in regulation.

With 4:50 left in the third period, Dallas’ Roope Hintz put the Stars on the board with his 32nd goal of the season.

Road to the Stanley Cup

The win boosts the Stars’ playoff hopes as they are in a battle for a Wild Card spot in the Western Conference. Currently, Dallas (88 points) owns the second of two Wild Card spots behind Nashville (89 points). Behind Dallas are Las Vegas (85 points), Vancouver (82 points) and Winnipeg (81 points). To officially clinch, the Stars would need to win seven of their final nine games.

Tampa Bay came into Tuesday’s game with three scenarios that would send them to the postseason.

A look at how the two-time defending #StanleyCup champion @TBLightning can punch their ticket to the postseason tonight. #NHLStats pic.twitter.com/oYWjPmVWfn

With the loss and the Islanders defeating Pittsburgh 5-4 in a shootout, the Lightning’s postseason celebration will have to wait.

However, the two-time defending Stanley Cup champions are still in a good spot to clinch a playoff birth. With nine games left in the 2021-2022 season, Tampa Bay needs just one win to earn its fifth-straight postseason appearance. The Lightning begin a five-game home stretch when they host the Anaheim Ducks on Thursday at 7 p.m.