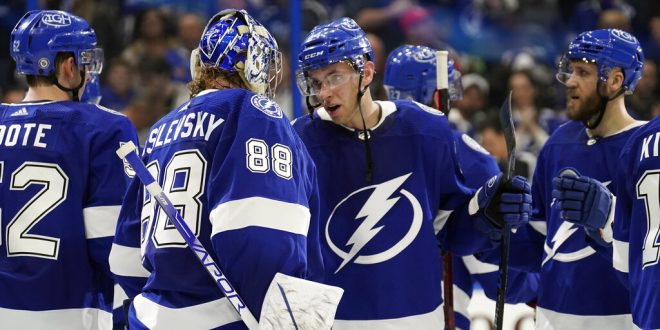 The Tampa Bay Lightning are facing the Dallas Stars at 9:30 p.m. on ESPN with a chance to clinch playoff birth.

The Lightning are coming off of a 5-0 home win against Buffalo. In addition, goalie Brian Elliot saved all 28 shots on goal. According to nhl.com, Elliot was named the Player of the Week.

Meanwhile,  the Stars are coming off of a 6-4 win on the road against the Chicago Blackhawks. In the Sunday game, Jamie Benn, Joe Pavelski, Roope Hintz, Jason Robertson and Tyler Seguin all scored. Robertson scored back-to-back goals in the second period, just over three minutes apart.

The Lightning and Stars previous matchup

The Bolts and the Stars faced each other for the first time this season in Tampa on Jan. 15. The Lightning came up with a 3-1 win. In the mid-January match up, goalie Andrei Vasilevskiy saved 19 of 20. Tampa Bay’s Brayden Point, Ross Colton and Alex  Killorn scored. Furthermore, Right-wing Nikita Kucherov recorded two assists to Point and Colton.

In the first-game between the two teams, Dallas Stars Esa Lindell scored the only goal for the Stars in the first period.

According to NHL Public Relations the Lightning can clinch a playoff spot tonight with the following scenarios:

Based on these scenarios, the Bolts are in the driver’s seat punching their ticket to the Stanley Cup playoffs.