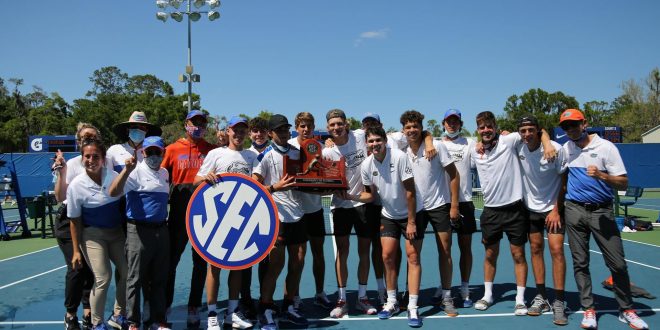 This weekend is huge for Gators men’s and women’s tennis teams. Both Saturday and Sunday, the teams will be celebrating eight seniors.

No. 23 South Carolina will come into town this weekend. This match will mark the 51st meeting between the Gators and the Gamecocks. Overall Florida has held the all-time advantage of 45-5.

With the Gators sitting fourth in the SEC with a 9-3 record, the winner of Saturday’s match will claim the fourth seed and a double-bye in the SEC tournament happening next week.

Coming off their third-consecutive SEC Championship, the men’s team is looking to host No. 21 Texas A&M for senior day. The Aggies are coming into the match with a 21-10 overall, and a 7-3 SEC record. This weekend’s match marks the 21st meeting between the two teams, with Texas A&M leading with 13 wins.

For the women’s celebration, the senior day will begin around  12:30 p.m. ET as Sydney Berlin, McCartney Kessler, and Marlee Zeinwill be honored for their dedication to Florida’s program.

On the men’s side of things, the celebration will also start around 12:30 p.m. on Sunday honoring Andy Andrade, Josh Goodger, Sam Riffice, Mattias Siimar, and Duarte Vale. These five seniors have contributed to the Gators winning three SEC titles and the program’s first-ever team national championship.

On the men’s team, Ben Shelton is ranked No. 1 in singles.  This season, Shelton went undefeated in singles against both No. 38 LSU and No. 41 Vanderbilt to extend a 12-match win streak. His overall singles career record in the 21022 seasons is 27-5.

Senior, Marlee Zein on the women’s team totals a 21-13 SEC Singles record during her time as a Gator. At the start of the spring season, she ranked No. 34 in the singles competition.

Both teams will compete in the SEC Tournaments going on next week.