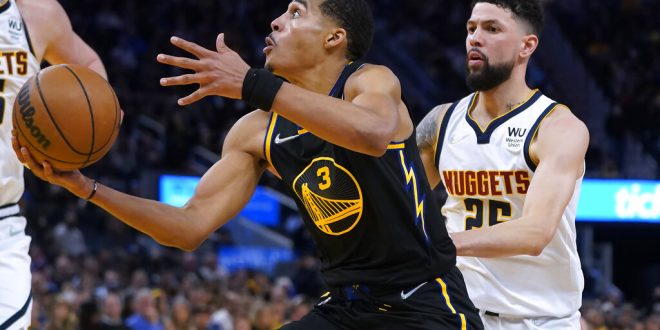 An ejection midway into the fourth quarter from Denver Nuggets center and MVP finalist Nikola Jokic capped off another blowout win for the Golden State Warriors. The Warriors took care of home court defeating the Nuggets 126-106.

At the Chase Center, Steph Curry’s efficient performance off the bench gave the third-seeded Warriors a 2-0 series lead in the first round of the playoffs. The baby-faced assassin scored a game-high 34 points shooting 12-for-17 from the floor including 5-of-10 from three-point range. A stellar outing for the three-time champ and two-time league MVP in just 23 minutes of action.

At the height of their powers, Golden State had a stranglehold in the Western Conference. The Dubs went on five consecutive trips to the NBA Finals. However, since the departure of Kevin Durant in 2019, the Warriors dynasty took a bit of a break along with their prestigious “Death Lineup”.

Exactly, the combination of Curry, Green, Durant, Klay Thompson, and Andre Igdoula ran the NBA landscape but, that was a thing of the past.

Also, injuries to pivotal players to a sharpshooter like Thompson derailed any title hopes from the previous two years.

The only player in the shot clock era to score 30+ points in 23 minutes or less of play during a Playoff game:

Fortunately, under coach Steve Kerr, developing young talent through the draft became essential to the Dubs returning to top contenders in the West. One bright spot is this 6-foot-4 shooting guard out of Michigan.

Yes, Jordan Poole. In his third season, the 22-year-old has been a great find for the Warriors brass. Poole took over the scoring load in the absence of Thompson and Curry, proving himself to be a reliable and consistent contributor.

Rather it’s coming off the bench or starting, there is no doubt the improvement in his game has skyrocketed especially, in his first few playoff appearances.

The former first-round pick piggybacked his 30-point playoff debut in Game 1 with 29 point performance, Monday. Like Curry, Poole shot 5-for-10 from long range. Also, Thompson added 21 points drilling in a couple of jaw-dropping triples as well.

The trio broke open the game after a 44-point third-quarter, launching eye-opening triples from behind the arc. Now, a new form of the “Death Lineup” with Poole’s shooting and playmaking abilities could see similar success. Additionally, the three guards combined for 13 total triples.

Although the reigning league MVP in Jokic bounced back from a not-so-hot performance in Game 1, emotions still ran high for the seven-footer. In the midst of the Warriors scoring onslaught in the third, Jokic received his first technical foul.

Not just Jokic, the Nuggets as a team was out of sorts. At a timeout, Will Barton and Demarcus Cousins exchanged words and the players were separated from one another.

Will Barton and DeMar Cousins had to be held back from each other by Nuggets teammates during the last timeout.pic.twitter.com/tK3junIJra

The cause of the uncharacteristic behavior? The Warriors’ defense. Kerr said defending the big man continues to be a focus for Golden State after Game 1.

Green’s defense bothered Jokic throughout the night. So much so, with seven minutes left, the Nuggets center received his second technical foul, ejecting him from the game.

But, he did finish the night with 26 points and 11 rebounds. Now, Jokic and the Nuggets hope to avoid a 3-0 hole as they return home on Thursday for Game 3.