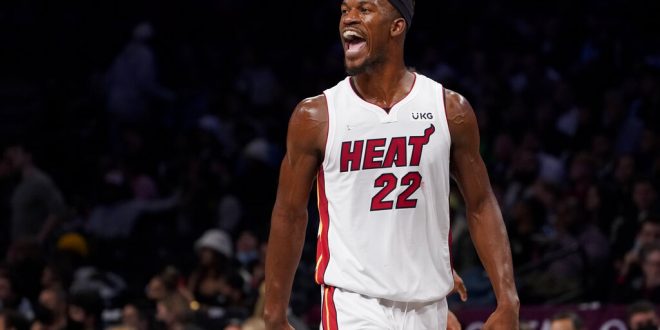 Miami Heat forward Jimmy Butler reacts during a time out in the final minutes of the second half of an NBA basketball game against the Brooklyn Nets, Wednesday, Oct. 27, 2021, in New York. (AP Photo/John Minchillo)

Temperature Heats Up on South Beach for Game 2 of Playoffs

The temperature is heating up in South Beach as the Heat look to extend their hot start in the first round of the NBA playoffs against the Atlanta Hawks.

The @MiamiHEAT took Game 1.
The @ATLHawks look to even things up tonight.

Game two will be played tonight at the Heat’s house on Biscayne Boulevard in front of the ‘white-hot fans.’

The Heat took game one of the series defeating the Hawks 115-91. Atlanta felt the wrath of the Heat defense holding Hawks star, Trae Young, to just eight points. During the regular season, the point guard averaged 28.4 points.

In the win, Duncan Robinson led the Heats offense coming off of the bench to score 27 points, making eight out of the nine 3-point shots. Small-forward Jimmy Butler followed with 21 points, six rebounds, four assists and three steals.

The depth of the Heat team could pose a problem for Atlanta in game two. In the Hawks play-in game on Friday, center Clint Capela suffered an injury that is being evaluated on a weekly basis. Furthermore, a Hawks starter John Collins is hoping to play more minutes tonight as he comes back from an injury that sidelined him in March.  In game one, Collins played 21 minutes and scored 10 points.

However, Collins is still in the process of returning to the full rotation.

Meanwhile, Young is expected to rise to the occasion tonight. With Young’s talent and competitiveness, it is anticipated that he is going to step up to the challenge to even the series. Young is ready and knows what expect.

Trae Young said he knows more about Miami's defense and energy after Game 1:

"It's my job and our team's job to really match it. When a bully's trying to bully you, you don't just let them. You have to bully them back. That's how I feel and that's what we've got to do tonight."

The Miami Heat led the stats in just about every category in game one. However, it is crucial the Hawks respond and pick up a road win to avoid going down 0-2. A win on the road in Miami would be huge for Atlanta.

In Game one, the Hawks scored 17 points in the first quarter, where the Heat scored 23 points.

The Heat shot 47.4% from the three-point line in game one.

The Hawks committed 18 turnovers and the Heat scored 22 points off of the turnovers.

The Heat committed 22 fouls and the Hawks shot 85.2% from the free throw line. It is crucial the Hawks capitalize off of free throws.

The Heat need to take care of the ball to minimize turnovers. In game one, the Heat turned the ball over 15 times and the Hawks scored 17 points off of turnovers.

In game two, the Heat committed 22 fouls and the Hawks made 23 out of the 27 free throws. The Heat play high-intensity basketball but it is important to remain controlled to limit fouling.

It is critical for the Heat to prepare for a Trae Young that is ready to dominate. Young is able to penetrate into the paint, hitting the gaps.

The Heat earned 40 rebounds in game one which allowed the Heat to have extra possessions which ultimately leads to points.