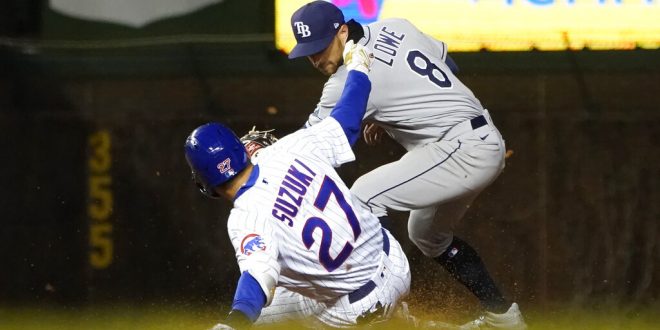 The Tampa Bay Rays couldn’t secure the win against the Chicago Cubs when the teams played on Monday. Tampa lost by a score of 4-2 and has now lost five of its last six games.

Tampa started the game at the plate but struggled to find its footing early on. Brandon Lowe was walked, but he was followed up by 2 strikeouts and a pop-up to give Nick Madrigal and the Cubs a chance to take the lead. They failed to do so as they could only find 2 groundouts and a strikeout.

At the top of the 2nd inning, Tampa Bay saw at-bats all ending in outs. When the Cubs were up, they got the game moving offensively.

Seiya Suzuki reached first on a throwing error by Taylor Walls. After seeing Yan Gomes strike out, Patrick Wisdom took to the plate and hit a home run to score Suzuki and himself.

The 3rd inning was quiet for both squads. The Rays again saw three people up to bat, none of which could get on base. Madrigal got on base for the Cubs, but his teammates couldn’t register a hit.

Josh Lowe got the ball rolling for Tampa hitting a single and then stealing second base in the 4th inning. After a Randy Arozarena out, Ji-Man Choi batted in the first Rays score of the game with his single. Choi advanced to third base but was left on base as the Rays tallied their 3rd out.

The Rays closed out the 4th inning with a strong defensive effort. Suzuki singled and tried to run for second but was thrown out by Arozarena. Shane McClanahan followed this up with 2 more strikeouts.

Brett Phillips was sent to the plate and managed a single. Walls was then walked and the Rays had two players on base. Josh Lowe batted in Phillips and the game was suddenly tied. McClanahan closed the inning keeping the score tied.

The Game Slips Away

In the 6th inning, neither team was able to pull away. The Rays and Cubs each got hits but weren’t able to score.

At the top of the 7th, the Rays again could not score. Walls was walked and the team had 2 strikeouts and a pop-up to give the Cubs a chance to take the lead.

Chicago was able to do just that. McClanahan was pulled and Jason Adam hit the mound. After hitting one batter and walking another, Adam was replaced with Jeffrey Springs who gave up a single that scored Suzuki.

Tampa Bay failed to respond as it saw a strikeout and 2 groundouts. The Cubs had a chance to extend their lead and answered the call again. A Frank Schwindel home run gave the team a 2-run lead.

The Rays took over at the top of the 9th with only one more chance to even the score. A walk and three outs ended the game and sealed the victory for the Cubs.

This defeat gives the Rays losses in five of their last six games and puts them at 5-6 on the season. While this game resulted in a loss, there were a few positives.

Choi continued his hot streak and is hitting .423 this year. McClanahan tallied a career-high 9 strikeouts.

The Rays will continue the series against Chicago tonight.

Previous NBA Playoffs: Game Two Previews
Next Game Of The Year Contender: Oak Hall Gets Their Revenge On Union County In Thrilling Fashion