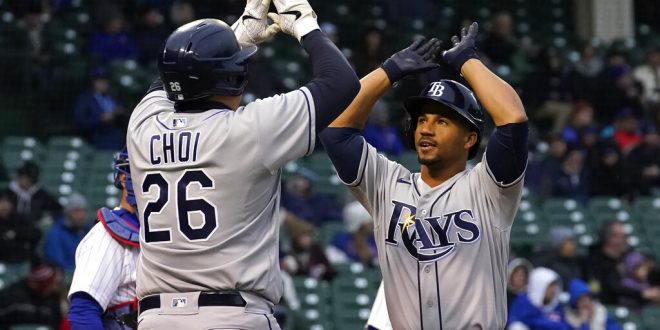 On a night when the opening pitch was moved up 70 minutes due to rain in the forecast, no one knew how much baseball would be played.

Coming off wins in two of their past three after a three-game losing streak to start the season, the Rays were looking to end their Chicago road trip in style. They did just that.

On a night where the Rays needed to jump out fast, they were able to get a spark. Francisco Meija homered in the first inning and drove in three runs on the night to lead the Rays.

After the first inning, the Rays were holding a commanding 4-0 lead.

*Checks to see how many innings we need to play for the game to be official* pic.twitter.com/8rjhjrldGC

To add to Meija’s strong night,  Josh Lowe provided a double, a triple and one RBI. Randy Arozarena, Kevin Kiermaier and Wander Franco also all doubled in runs as well throughout the night.

Jalen Beeks picked up the win for the Rays, moving to 2-0 on the season. Marcus Stroman got the loss for the Cubs after allowing eight runs in just four innings. Stroman has had a tough start to the season moving his W-L to 0-2.

Franco, the Rays shortstop prodigy, has had an outstanding start to his career. He entered the game with a league-leading 19 hits, along with four three-hit games. His double on Wednesday night adds to the success he has had to start his young career.

When it rains, it pours [Rays runs] pic.twitter.com/fSRynjUrDq

The Rays seem to have shaken off the offseason rust while proving they are one of the most explosive offenses in baseball. After losing three straight, the Rays bounced back in a strong way and have now won three of their last four.

Up next Tampa Bay will head back home and host Boston for a three-game series starting Friday. Corey Kluber is slated to start the opening game.

For the Cubs, they have the Pirates next for a four-game series. 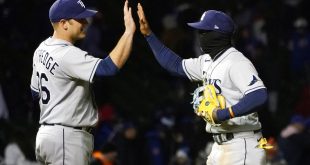 Franco, Rays Even Series with Cubs