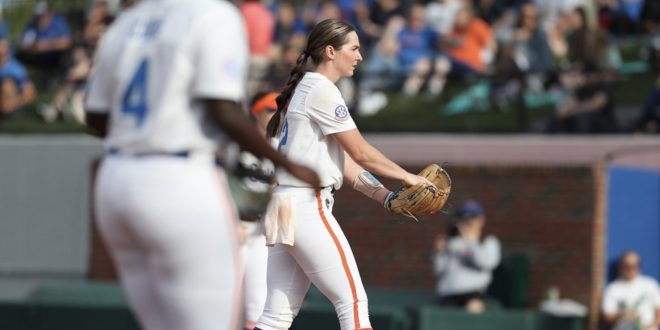 Elizabeth Hightower recorded her third shutout of the season as the Florida Gators won 1-0 against the USF Bulls on Wednesday, April 20. (Photo from Emma Bissell, floridagators.com)

Gator softball (35-9) took down the USF Bulls (35-12) 1-0 on Wednesday evening at the Katie Seashole Pressly Stadium. The game was shutout with strong play from the circle by Elizabeth Hightower.  This game now marks Florida’s 13th shutout of the season. For Hightower it was her third shutout of the season and the 13th of her career. Through the seven innings, the Gator Senior only allowed three hits.

T1 | Hightower picks up a pair of strikeouts to start us off!! #GoGators

Florida took the lead in the sixth inning with an incredible game-winning run from Skylar Wallace. The redshirt-junior reached first on a walk, followed by a steal at second base when the throw went into left-field, after two outs. She was then able to make it home, after a throw to second went straight to the outfield. After South Florida missed another throw, Wallace was able to make it home and secure the game. During her run, Wallace made history securing her 37th stolen bag of the year at second. That will mark a new single-season record for the Gators, breaking Kelsey Stewart’s 36-steal record from the 2013 and 2014 season.

In the next inning Kendra Falby slid to make a catch out in the left field. The USF Bulls had two runners set up to score, but between Hightower and Falby, they didn’t stand a chance to secure a run. Other strong Gator defense play came from Charla Echols and Sarah Longley. With a diving grab near third, and runners at first and second, Echols made the second out of the second inning.  Longley also joined the party during the fourth inning, making a grab in foul territory at the infield near first base. With a Bull at first, Longley’s play would wrap up that inning.

This game marks another back-to-back win for Gator softball against USF since 2012. They now improve to 58-13 all-time against the South Florida Bulls and hold a 29-9 record at home.

The Gators now sit at eighth best in the nation. They continue game play in the Southeastern Conference this Friday through Sunday in a series against No. 7 Arkansas at home. Gator senior players will also be recognized prior to the game.