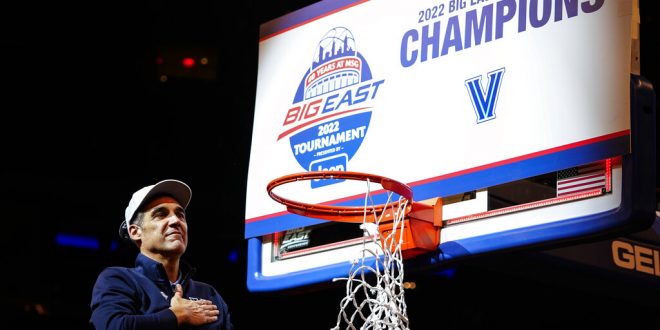 Villanova head coach Jay Wright gestures to supporters while cutting down the net after the final of the Big East conference tournament against Creighton, Saturday, March 12, 2022, in New York. (AP Photo/Frank Franklin II)

The legacy of Jay Wright

Jay Wright was very successful in his time with the Villanova Wildcats. He won two national championships and went to the NCAA tournament in 16 of his 21 seasons with the team, including 2022. Wright was inducted into the Naismith Basketball Hall of Fame in September.

Wright won national championships in 2016 and 2018. Six players from those two teams made the NBA, five of which are still on rosters.

Fordham’s Kyle Neptune to take over

We're excited to turn the reins of this treasure of a program over to @kyleneptune . Kyle was a part of our staff for 10 years , helped us win two national titles and returns after a successful season @FordhamMBB . He understands our culture and will keep it strong . pic.twitter.com/Nf6n1B5Gcv

Kyle Neptune spent 10 years as a video coordinator and assistant coach under Wright. In just one season with Fordham, Neptune led the Rams to a 16-16 record, a 14 win improvement over the 2020-2021 season.

Neptune was an assistant coach at Villanova during the 2016 and 2018 national championship teams.

Not the only one

Duke’s Mike Krzyzewski announced his retirement before the 2021-2022 season but coached it as his last year.

Both Jay Wright and Coach K made it to the Final Four in the NCAA Tournament before retiring.

Jensen Young is a journalism student at the University of Florida. He works as a sports writer for WRUF.com and is the voice of trendings on Wednesday mornings on the WRUF radio station.
@Jensen_Young9
Previous Six Gators Athletes are set to Represent in the first Annual NIL Summit
Next Rays Make Quick Work of Cubs