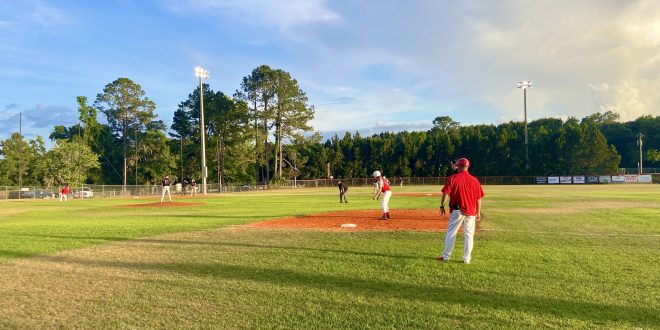 The Santa Fe Raiders faced off against the Palatka Panthers in the 4A District 4 semifinal baseball game. Santa Fe walked away with a 8-1 victory over the Panthers. The Raiders will host the district championship Thursday at 7 p.m.

Dylan Evans took the mound for the Raiders to start the game. Palatka’s Jonathon Germany attacked first with a score thanks to Tyler McInnis’ RBI.

Entering the bottom of the first inning down one run, the Raiders fought to even the score. Santa Fe’s Devan Mitchum took two bases off a Panther error to put himself in scoring position. Matthew Geelhoed’s RBI single brought Devan Mitchum home and tied the game 1-1.

Santa Fe’s Evans was a force to be reckoned with Tuesday night. On the mound, he quickly retired two Palatka batters via strikeouts. Evans followed up the strikeouts by hammering a hit into right field, allowing Zane Starling and Dalton Dampier to score two more Raider runs.

Devante Mitchum continued the action with a triple, bringing pinch-runner Dontrell Jenkins home for another Raider score. Santa Fe exited the second inning with a 4-1 lead over the Panthers.

Tyler Whitworth sent a hit deep into left field to reach second base, and a wild pitch from Palatka allowed him to steal third. Devante and Devan Mitchum were both walked to load the bases for Santa Fe. The next batter, Geelhoed, was also walked to bring home Whitworth from third.

Palatka Coach Sam Rick visited the mound and elected to keep Seth Waltimeyer pitching. The decision proved to be a good one, as the Panthers escaped the inning without giving up any more runs, despite the bases being loaded.

Conner Brown sent a solo home run deep into left field to get the Raider offense rolling in the fifth inning. Starling followed it up with a single and stole second shortly after.

The Panthers continued to struggle throwing strikes in the fifth inning. Ben Thompson was walked, and Devante Mitchum was nailed by a pitch to load the bases once again for the Raiders. Starling scored off a wild pitch to extend the Raiders’ lead 7-1 at the end of the fifth inning.

In the bottom of the sixth inning, Dalton Dampier dropped a hit in center field, bringing Conner Brown home. Brown’s run secured the 8-1 victory over the Panthers.

Santa Fe Coach Travis Yeckring discusses what his team will need to do to capture the district crown.

The Raiders will fight to defend their district title Thursday at 7 p.m. against Dunnellon High School. Santa Fe defeated the Tigers twice in the regular season.

Shailey Klein is a first-year journalism major specializing in sports and media at UF.
@shaileyklein
Previous Oak Hall Kicks Off Their Postseason With A Massive Win Over Peniel Baptist Academy
Next Who was Lusia Harris?