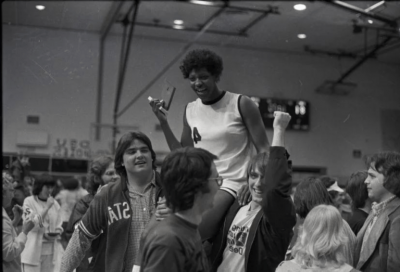 Lusia Harris held up by her peers after leading Delta State's women's basketball to team to one of its three national titles. Photo Credit: The NY Times

What does Scooby-Doo, a wooden chair and Bruce Jenner all have in common?

Their names were called during the 1977 NBA draft.

As if that weren’t random enough, a pregnant woman was also in the mix. The woman was Lusia “Lucy” Harris, a center out of Delta State. Despite turning down the opportunity to play in the league, her legacy will forever be cemented in sports history. This is her story.

Harris was the tenth of eleven children born to sharecroppers in Minter City, Mississippi. Born in 1955 at the height of racial turmoil in the U.S., and surrounded by impoverishment, Harris described her upbringing in a New York Times: Op-Doc titled “The Queen of Basketball.” Harris shared that she and her siblings would often help their parents pick cotton as a way of means.

Harris elaborated by saying “I know we went without, but we didn’t want for anything.” While the Harris’ didn’t want for much, they had something that the other kids in the neighborhood didn’t. A basketball hoop. Being the only ones with a goal, local kids would gather around their house to play ball.

Playing around in the day would be followed by long nights of studying some of the games best. Lusia would often spend late nights planted in front of the television watching the likes of Bill Russell, and Wilt Chamberlain; citing Oscar Robertson as her favorite.

She had the dream to shoot like Kareem. A 6’3 frame. Made the girl’s basketball team. Instant success right?

Not knowing how to actually play would ultimately set Lusia back after making the team. She recalled frequently being teased by classmates for her tall stature but lack of skill. “Long and tall, and that’s all” was one of the common taunts Lusia would hear from other students through the halls of Amanda Elzy High School.

Her game developed after committing to learning the fundamentals such as pivoting, moving the ball offensively and defense. Some things though were just natural for the rising star. Being long and tall wouldn’t be all after her skillset evolved. “I didn’t develop a shot, it just came natural,” Harris recalled of her high school days in the documentary. One of the fondest memories of Lusia’s high school hoops days was dropping 40 points on an opponent that hadn’t even reached 40 as a team.

As Harris’ game was progressing, so were efforts for equality in the U.S. In 1972, Harris’ senior year, Title IX was passed into law. Title IX is a federal civil rights law that states:

“No person in the United States shall, on the basis of sex, be excluded from participation in, be denied the benefits of, or be subjected to discrimination under any education program or activity receiving Federal financial assistance.”

With Title IX going into effect, playing at the next level would become a reality for Lusia. Her mind was set on Alcorn State University, an HBCU located 170 miles south of Minter City in Lorman, Mississippi. Alcorn not having a women’s basketball program yet forced Harris to reevaluate.

She settled on Delta State University, a small university located about 30 miles west of Minter in Cleveland, Mississippi. Her collegiate career would be played under the direction of head coach Margaret Wade.

Initially, Lusia had to adjust to being the only black woman on the team. No acclimation was needed once Harris stepped on the hardwood, leading the Lady Statesmen to a 15-1 season record her freshman year. The team’s season ended with a loss to Mercer in the semifinal round of the Association for Intercollegiate Athletics for Women (A.I.A.W), which was the then women’s equivalent of the NCAA.

The Immaculata University women’s Mighty Macs were the reigning champs from Immaculata, Pennsylvania claiming the national title in 1972, 73′ and 74′.

Knowing the type of competition they were up against, Delta State hit the ground running to start off the 1975 season. Averaging 101.7 points per game in their first four games, and eventually went undefeated. The Lady Statesmen made good on their word to make it to the national title stage, setting up a date with Immaculata in the title game. Led by Harris’ 32 points and 18 rebounds, Delta State managed to edge off the reigning champs 90-81 for the win.

Significantly, the 75′ title win was only the beginning. In the next two years, the program went on to have one of the most historical runs in all of college basketball. Delta State dethroned Immaculata’s three-year reign only to go on one of their own, claiming the 76′ and 77′ title. The three-consecutive national titles won by Delta State included the same starting lineup of Harris, Wanda Hairston, Ramona Von Boekman, Cornelia Ward and Debbie Brock.

As the Lady Statesmen sat atop the college basketball throne, they realized their winning came with newfound fame. In “The Queen of Basketball” documentary Harris recounted the outpour of support the women’s basketball team received from their community.

The team would regularly sell out their 4,500-seat gymnasium in contrast to the men’s team at Delta State which would typically only draw in half as many spectators. In what could be considered an alternate reality compared to today’s norms, the women’s team would often be the beneficiaries of many luxuries that the men didn’t receive. Such as flights to away games.

During Delta State’s three-year title run,  All-American honors were given to eight players. Head coach Margaret Wade also earned the Kellogg’s National Coach of the Year honor in 1976 and 1977.

The 1976 Summer Olympics in Montreal was the first time ever the Olympics featured a women’s basketball tournament. Representing Team USA, Lusia led the team to a second-place finish in the tournament as the leading scorer and rebounder.

Notably, in the inaugural game against Japan, it was Harris who scored the first basket in the game. Making her the first woman to score in Olympics women’s basketball. The team of 12 women included other legends such as Pat Summitt and paved the way for future generations of women’s basketball in the U.S.

Naturally, after such a historic collegiate career it is common to go on to play at the highest level professionally. Unfortunately, as Harris was working as a trailblazer, laying the foundation for the future of women’s basketball, the game was not what we know it as today. There was no WNBA for Harris to turn to continue competing at the highest level.

Ultimately, she decided to start a family with her high school sweetheart George E. Stewart. Soon after she started the new chapter of her life, the NBA came calling. In 1977, the then New Orleans Jazz used their seventh-round pick on Harris. They reached out to Lusia to try out for the team but were immediately shot down. Harris stated that her reasoning behind saying no to the NBA was her commitment to starting her family and worries that she was only being used for a publicity stunt.

Being the first woman drafted to the NBA wouldn’t be the last way Harris made history after ending her playing career. In 1992, she became the first Black woman inducted into the Naismith Memorial Basketball Hall of Fame. Things came full circle for Lusia as she was escorted at the ceremony by Oscar Robertson, her idol whom she spent many late nights studying.

Regardless of not playing professionally, Lusia’s skillset would not go to waste. After her playing career ended, she returned to Amanda Elzy High where she became the head girls basketball coach. Returning home helped Harris in her battle with Bipolar disorder.

After the release of the short documentary about her life, Lusia sat down with Robin Roberts of Good Morning America to discuss her story further. During the sit down she spoke about whether or not she had any regrets about turning down the offer from the Jazz.

She recognizes her four children who all went on to achieve major accomplishments academically and athletically as her lack of regret. She is survived by her four children and grandchildren after her unexpected passing on January 18, 2022.

USA Basketball mourns the loss of The Queen of Basketball, Lusia Harris.

Lusia was a 1976 Olympic silver medalist, scored the first points in Olympic women's basketball history & became the first Black woman inducted into the Naismith Basketball Hall of Fame in 1992. pic.twitter.com/ISrRjIqM3x

In the sit-down with Good Morning America, Harris also discussed what she wanted the new generation she has inspired to learn from her remarkable story.

While Lusia’s story has continued to inspire many generations to push themselves to new limits, it has also helped inspire much-needed change in pushing women’s athletics forward. NBA Hall of Famer and executive producer Shaquille O’Neal sat down and spoke with Ben Proudfoot, the director of “The Queen of Basketball” about Lusia’s legacy. The 15x All-Star discussed why he thinks Harris’ legacy represents change.

The sports world was shocked by the sudden passing of such an astounding pioneer when her death was announced in January. Her story continues to live on, even being recognized with the Best Documentary Short Subject award at the 2022 Oscars for her recount in “The Queen of Basketball.”

While Harris never received the commercial fame of her successors such as Lisa Leslie or Sheryl Swoopes, making room for people to question who she was. It was her relentless effort and perseverance that allows no room for anyone to question her impact on the game.