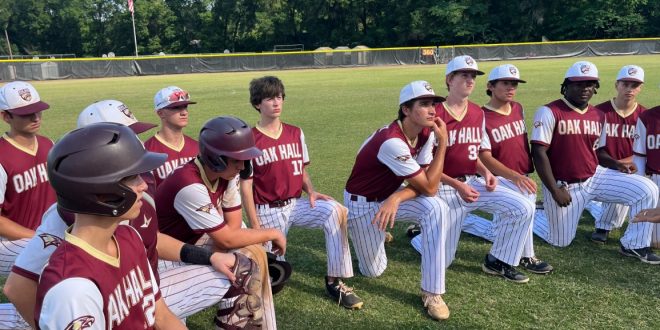 The Oak Hall Eagles have already put together a historic season. The team put together a 13-2 record in the regular season, along with an undefeated record at Roger Maris Field. With the postseason now underway, it appears the Eagles have already picked up right where they left off. In their District Semifinals matchup this past Tuesday, the Eagles dismantled the Peniel Baptist Academy Warriors en route to a 15-0 mercy-rule victory.

Oak Hall’s offense had another fantastic outing, as the team picked up 12 hits on the day. Harrison Beach led the team’s offensive surge with one of his finest games at the plate this year. Beach went 3-for-3 in Tuesday’s game. He also drove in three runs and scored two runs of his own in the process. Aaron Akins, Emory Ezzell and Jackson Beach all racked up multi-hit games of their own as well. All three players mentioned picked up two hits each. They also each drove in two runs on the day.

The Eagles’ performance on defense also played a sizable role in the team’s dominant day. Jack Kuzmicki got the start on the mound. Safe to say, he made all his pitches count. In just three innings pitched, Kuzmicki only allowed one hit and one walk while giving up no runs. He also threw out five strikeouts on the day. Ezzell finished things off on the mound in the fourth inning, sitting the Warriors down with just eight pitches.

Both Teams Start The Game Slow Out Of The Gate

Neither team could get anything going in the first inning of play. The only hit of the inning for either side came from a double by Harrison Beach. Beach did make it to third base on a passed ball. However, he was subsequently stranded there following a groundout to end the inning. A pop out and a ground out in back-to-back plate appearances sealed Oak Hall’s scoreless start.

However, while the Eagles did not find much success offensively to start the game, the Warriors had it even worse. The team only succeeded in landing a runner on base following a dropped third strike. The Warriors picked up three groundouts in the first inning alone. Kuzmicki only had to throw nine pitches in the top of the first inning; four of those pitches came from a plate appearance that finished with a dropped third strike.

The Eagles quickly got their act together in the bottom of the second inning. While the Warriors landed runners on first and third base in the top of the inning Kuzmicki handled the situation with ease. He racked up three strikeouts in the inning to avoid allowing any runs. The close call in the top inning effectively served as a wake-up call for the Eagles. And they swiftly answered it.

Answering The Call To Action In The Second Inning

At first, it appeared the Eagles may have been doomed for another scoreless inning. The team was served an early setback after picking up a strikeout in their first at-bat of the inning. However, their luck quickly turned back around. Ethan Szlachetka drilled a line drive into center field for a single. Right after that, he made his way over to second base on a passed ball from Peniel; he also stole third base just three pitches later. Eventually, Ezzell knocked a fly ball single into right field that allowed Szlachetka to score.

After Ezzell made it over to third base on a wild pitch and a stolen base of his own, Peniel walked Brody Beaupre. With runners now on first and third base, Akins picked up his bat and made his way to the plate. After a ball from Peniel’s pitcher, Andrew McManis (the pinch runner for Beaupre) stole second base. Akins now had a golden opportunity to extend Oak Hall’s lead. Akins swung on a pitch and missed it. Strike one. He decided to hold back on the next pitch and see what he was working with. The Warriors’ pitcher threw another strike. The pitcher followed it up with another ball, evening the count at 2-2.

With Head Coach Kevin Maris encouraging Akins to “swing on any strikes” he sees, Akins saw a pitch right down the middle. He took it and hit a beautiful line drive. The ball flew right off his bat and passed through the gap between Peniel’s third baseman and shortstop. With the ball rolling all the way into deep right field, Akins made it all the way over to third base, allowing Ezzell and McManis to score with ease.

The only thing hotter than Roger Maris Field today is Oak Hall’s offense! Aaron Akins laid down a BEAUTIFUL line drive into left field on a 2-RBI triple (my phone overheated before Akins reached third base in the video). The Eagles now lead 3-0 with one out in the 2nd inning. pic.twitter.com/IHcPkoYm77

“I had to try to get [the runner on third] home. Once I hit the ball between third and short, Coach Hill sent me, and I just kept running,” Akins said. “From the get-go, I thought it was a single–maybe a double… I just heard Coach [Hill] yelling at me to keep running. That’s how I ended up on third.”

Akins’ massive hit served as a turning point for the Eagles. The team knocked in back-to-back-to-back hits in their subsequent three at-bats. Jackson and Harrison Beach each secured an RBI single, while Jack Kuzmicki blasted an RBI double into center field. Two plate appearances later, Troy Freeman hit a line drive into left field to bring home Abram Jerkins (who pinch ran for Kuzmicki). By the time the inning had wrapped up, Oak Hall had taken a substantial 7-0 lead.

After two innings, the Eagles hold a 7-0 lead over the Warriors. A batch of hits from Jackson and Harrison Beach, Troy Freeman and Jack Kuzmicki (the latter’s double is shown here) helped Oak Hall take over in a dominant second inning. pic.twitter.com/pZgYBiEXnN

Another Spectacular Inning Propels Oak Hall To A Double-Digit Lead

The Eagles did not let up following their stellar second inning. In a quick top of the third inning, Kuzmicki sat down three consecutive Warriors batters in just nine pitches once again. All it took was a ground out, a pop out and a strikeout (in that order, to be exact). At this point in the game, Oak Hall had this game in the palm of their hands. Nevertheless, instead of becoming complacent with their lead, the Eagles played at maximum intensity up until the final out.

“We wanted to get out of here fast. We knew what we were playing,” Harrison Beach said. “[We] didn’t want to change anything up.”

Meanwhile, Neil Ruth cruised to first after being hit by a pitch in the ensuing at-bat. With two of the Eagles’ fastest runners on the bases, it was only natural that some fleet-footed action would occur. Right before Peniel’s pitcher prepared to throw his first pitch of his plate appearance against Troy Freeman, Ruth took off running towards second base. Sensing the action behind him, Peniel’s pitcher turned around in an attempt to catch Ruth stealing. With the defense’s attention diverted, Harrison Beach dashed towards home plate.

As Ruth safely slid into second, Beach closed in on home plate. The defense once again switched their focus, now attempting to catch Beach at home. Ruth, sensing another opportunity, quickly made his way over to third. Beach successfully scored, and Ruth had cruised onto third base. In just the blink of an eye, Oak Hall had extended their lead to double digits.

The Eagles went on to score another three runs in the inning. Ruth scored on a balk from Peniel’s pitcher. Freeman, who Peniel ended up walking, wound up scoring on a passed ball. To cap off another fantastic stretch, Ethan Szlachetka (who was also walked) scored on a hard ground ball into left field by Ezzell. Oak Hall now had a commanding 13-0 lead.

Wrapping Things Up With Ease In The Fourth Inning

The rest of the game proved to be just business as usual for Oak Hall. Ezzell took the mound in relief of Kuzmicki to keep the latter’s arm somewhat fresh in the coming days. Ezzell also handled the Warriors with ease, picking up his three outs with a fielder’s choice, a strikeout and a runner caught stealing.

The Eagles wasted no time in finishing this one off at the plate. Akins knocked a fly ball into left field for a single. Beach followed this up with a deep hit into left field of his own for a double. Akins scored on the hit. However, after Peniel’s left fielder overthrew the second baseman, Beach got back on his horse and sprinted around third base, eventually making it home to give Oak Hall run number 15. With the mercy rule threshold having been met, the game came to an abrupt end. Oak Hall had secured the W and clinched a berth in the 2A District 4 Championship game.

Eagles win! An arid throw from Peniel on a Jackson Beach double allows Beach and Akins to score, clinching a 15-0 victory for Oak Hall in four innings. Harrison Beach led the team’s offensive charge with 3 hits, 3 RBIs and 2 runs. Jack Kuzmicki gets his fifth win on the mound. pic.twitter.com/yIDLlNl2lQ

Coach Maris voiced his pleasure with the team’s all-around performance on the day. While the team did not play a perfect game, they came extremely close to it. The box score reflected their sheer dominance throughout the entire afternoon.

“The guys came out swinging the sticks. They started off slow in the first inning, but they decided to step it up a notch,” Maris said. “We had an outstanding performance from Jack pitching on the mound… Defensively, we played smooth, and I was just happy with the performance.”

On To The Next One

Tuesday’s win served as a nice morale booster for the Eagles. However, the team has made it clear they do not want to get too ahead of themselves. With a District Championship on the line in their matchup with the St. Joseph Academy Flashes this Thursday, the team is ready to spring right back into action.

“We took care of what we needed to do [on Tuesday],” Kuzmicki said. “But just like Kobe [Bryant] said, ‘The job’s not finished.'”

Jack Meyer is a first-year student at the University of Florida. He is majoring in Journalism and specializing in Sports and Media.
@jackmeyerespn
Previous Pat Dooley’s Back Nine (May 2nd)
Next Santa Fe High Baseball Advances to District Championship