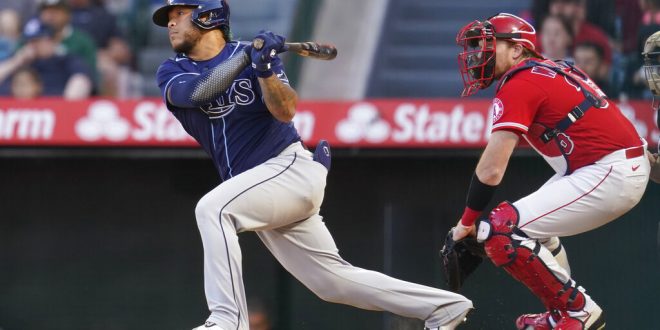 The Tampa Bay Rays look ahead to a series with the Toronto Blue Jays.

A competitive series will start Friday as the Rays host the Blue Jays in an American League East battle.

The Rays come in ranked second in the AL East with a 19-13 record, four games back from the first-place Yankees.

Tampa is coming off a series loss to the Los Angeles Angels.

The Blue Jays are in third place in the AL East, six games back of the Yankees, and with a record of 17-15.

Toronto has dropped four of its last five.

Outside being no-hit by the Angels on Tuesday, Tampa is coming into the series  7-4 for the month of May and with a win in the final game of the Angels series.

Among starters, the Rays are being led on offense by Manual Margot, batting .337, and shortstop Wander Franco, batting .317.

Mejia has 29 hits in 95 plate appearances and has batted in 20 runs.

In addition, Franco, in 126 plate appearances, has 38 hits, 15 RBIs and four home runs on the season.

On the mound, Drew Rasmussen is leading all starters with a 3-1 record and a 2.89 earned run average.

For the relief pitchers that have pitched at least one full inning, Phoenix Sanders leads the bullpen with a 1.80 ERA in 10 innings pitched.

The Blue Jays travel to St. Petersburg, looking to turn things around for the month of May.

They are coming into the game 3-7 this month and losers of their last three.

Toronto is tied with the Rays in batting average in the league.

Their offense is being let by a 2021 Silver Slugger and All-Star game MVP, Vladimir Guerrero Jr.

Guerrero is sitting at a team-best .286 batting average and adding 32 hits, seven home runs and 19 RBIs to the team effort.

The young star had a breakout season last year and is looking to get his team out of this slump.

Vladimir Guerrero Jr. snaps his bat over his knee in absolute disgust with himself pic.twitter.com/EWvDSsBmXI

On the rubber, Alek Manoah has been lights out for the Jays.

The rest of the pitching roster is struggling, however, as Toronto is 22nd in ERA.

Kevin Gausman and Drew Rasmussen are the probable starters.

Gameday is Friday and first pitch is set for 7:10 p.m.