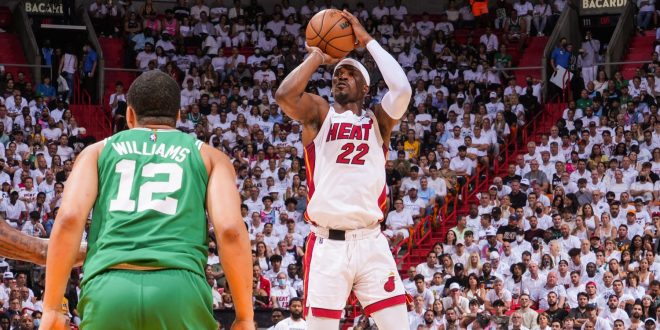 After an impressive game two win in Miami, the Celtics lost game three on Saturday night by a score of 109-103. The Heat look to maintain their series lead in game four.

Adebayo Turns Up the Heat

Miami gained a double-digit lead within the first few minutes of the match. The team led by 26 points at their peak. Heading into the second half, the Heat had a comfortable 15-point lead. Center Bam Adebayo contributed 16 points in the first two quarters.

Things Get Shaky for Miami

At the beginning of the second half came the announcement that Jimmy Butler would miss the rest of the game. Miami’s star forward was down for the count due to knee inflammation. Luckily for the Heat, the rest of the team stepped up in Butler’s absence. In one of the best games of his career, Adebayo poured in 31 points, 10 rebounds, and six assists. Guard Max Strus was also a huge help, scoring 16 points in the game. Strus managed to hit a clutch late in game three. Here, Head Coach Erik Spoelstra credits Boston with bringing out the best in all the Heat players:

The Heat have outscored the Celtics in only 2 of the 12 quarters this series.

How the Celtics Can Bounce Back

Forward Jayson Tatum has spent the season making a huge impact for the Celtics.

Jayson Tatum has been guarded by PJ Tucker for 127 possessions this season (regular season and playoffs).

He has scored 15 points in those 127 possessions. pic.twitter.com/iiM6G8mRyC

After a disappointing performance in game three, Boston will continue to rely on Tatum in game four. If his shooting percentage increases from the last game, with the help of his teammates, the Celtics should be in good shape.

How the Heat can Take a Commanding 3-1 Lead

Surely, the Heat will need another star performance from Bam Adebayo. After playing quite shyly through games one and two of this series, Adebayo showed what he’s really capable of in game three. Hopefully, with Jimmy Butler returning, the all-star duo will be showcased in game four.

Game four will be hosted by Boston in the TD Garden, where the Heat will attempt to maintain their series lead. Tip-off is scheduled for tonight at 8:30 p.m.

Previous Overcoming Obstacles and Becoming A Division 1 Athlete: The Story of Andrew Tisher
Next Gators Softball Advances to Super Regional