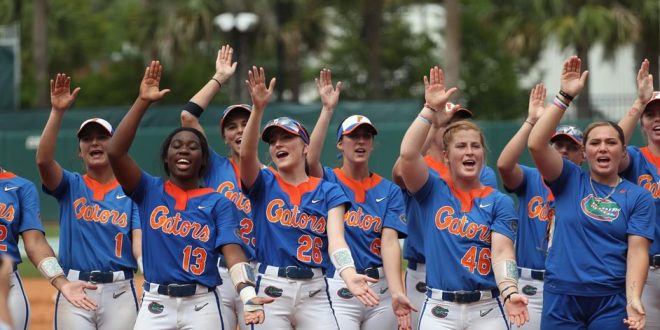 The Gators celebrate the weekend's victory. Photo by Chris Kim, courtesy of FloridaGators.com.

For the 14th time in program history, Gators softball advances to the super regional round of the NCAA tournament.

Florida hosted a regional over the weekend and played Canisius College, Georgia Tech, and Wisconsin – soundly beating all three opponents. The Gators are now 46-16 on the season.

A Good Day at KSP‼️ #GoGators

The regional marked what may be the last home appearance for fifth-years Natalie Lugo and Hannah Adams, graduate student Marisa Mesiemore, and senior Cheyenne Lindsey. If this was their final time in Pressley Stadium, it was certainly a weekend to remember.

Game One Versus the Golden Griffiths

The Gators opened the weekend with a decisive win against Canisius College. RS junior Skylar Wallace led the team in hits, going 3-for-3 in the regional opener. Additionally, pitchers Lexie Delbrey, Rylee Trlicek, and Natalie Lugo combined for the Gators’ fourth one-hitter this season. Despite a weather delay lasting nearly an hour, the Gators wrapped up the game in the fifth inning with a final score of 10-1.

B1 | Wallace puts on the board first with her seventh HOME RUN of the season!! #GoGators

Saturday’s match saw a total of nearly four hours in weather delays. The first delay, lasting close to three hours, came just after the first out of the third inning. The Gators had managed to put two runs on the board thanks to a two-RBI double from freshman Reagan Walsh.

B1 | Walsh comes through with a two-RBI double to left center to put Florida on top!! #GoGators

Following the first delay, the Yellow Jackets scored one run – but Georgia Tech’s scoring stopped there. The remainder of the game consisted of run after run by the Gators. After pushing through yet another weather delay, Florida capped off the game with two strikeouts in the seventh inning.

Beating the Badgers in the Regional Final

In contrast to the weekend’s first two lightning-filled matches, Sunday’s NCAA regional championship wrapped up quickly. The Gators shut out the Wisconsin Badgers in an impressive 11-0 victory. Florida set the stage for a win with 10 runs in the first inning – a program record.

Through the rest of the match, the Gators allowed only three hits by Wisconsin. In what may be her last game in Pressely Stadium, Natalie Lugo capped off the regional championship match with a stunning strikeout.

The @natalieglugo strikeout that sent the #Gators to their ninth straight Super Regional! pic.twitter.com/oLqMg6uYlt

Up Next: Florida Versus Virginia

This Friday, the Gators will travel to Virginia Tech for the Blacksburg NCAA Super Regional. The Hokies are the No. 3 seed in the tournament, while the Gators are seeded 14th. This will be Virginia Tech’s first time ever hosting a super regional. For Florida, it’s their ninth-straight year attending one.

The #Gators softball took a minute to salute and thank its home crowd— quite possibly for the final time this season— after beating Wisconsin to advance to the Super Regional. pic.twitter.com/0eJr3j5lx2

The Gators take on the Hokies this Friday, May 27. The first pitch for Game 1 of the Blacksburg Super Regional is set for 2 p.m. ET.

Sophie is a telecommunications major graduating in Summer 2022. She works as a host & Edutainer at ITProTV, and as a student producer, writer, voice, & sports coordinator for ESPN Gainesville. She is also a voice actor independently for various clients on a national level.
@SophieGoodwinUF
Previous Heat Looks to Maintain Series Lead in Game Four
Next Gators Men’s Basketball Hires Taurean Green 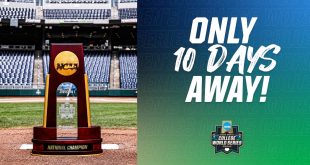 On Friday, June 10 the NCAA Super Regionals are scheduled to begin and will end …