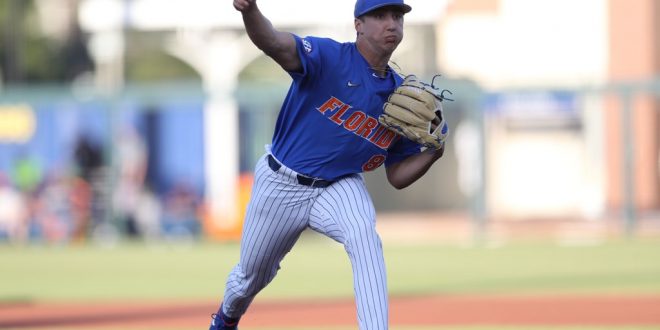 Beginning of the End for the 2022 SEC Baseball season

The Florida Gators, along with the seven other SEC Baseball teams, will compete in Game 1 of the Southeastern Conference baseball tournament at the Hoover Metropolitan Complex. The showdown will mark the beginning of the end of the season for the Florida Gators fighting for the SEC Championship title. With the #1 seed Tennessee as the favorite to win the title, anything can happen until the SEC Tournament Championship game comes to a close on Sunday, May 29th.

The Gators will face the South Carolina Gamecocks in a single elimination game with hopes to survive and advance to Game 6 vs. #2 Texas A&M. Coming in from a hot series win against the Gamecocks this past weekend, Florida is feeling confident with what their first game could have in store for them.

Here are the games for Day 1 of the SEC Tournament:

Looking Forward with the Favorites

Georgia #6 is the favorite in Game 1 of the SEC Tournament facing #11 Alabama based on rankings. With this being said, Georgia is on a not-so-hot streak after losing a home series to Missouri and struggling throughout the later spring. In addition, Alabama is looking at a semi-home game here, giving them more of an advantage. With the Bulldogs heading in the wrong direction, they are still leading with the stronger lineup in the game. As long as Georgia can defeat becoming their own worst enemy first, the odds should be in their favor for Game 1.

After Florida #7 took the weekend series from #10 South Carolina, the Gators are hoping to continue this momentum into the tournament’s Game 2 making them the favorite for this matchup. However, with right hander Will Sanders starting for South Carolina, the Gamecocks should have the advantage on the mound. Where South Carolina will struggle is at the plate, the fear is that the team will not be able to put up the numbers on the board needed to take the win. Once the Gators see South Carolinas call to the bullpen, Florida’s superior batting lineup could help them secure their next win.

While #8 Vanderbilt is favored here due solely to rankings, only time will tell how Game 3 shakes out. After using most arms through their last series against LSU, Game 3 might see one of the two freshman: Carter Holton or Bryce Cunningham. With an extremely effective season so far for left hander Holton, the Commodores should have a better sense of security with him on the mound. Whereas #9 Ole Miss will start Dylan DeLucia. With this matchup split, it will be up to both offenses to battle it out for Game 3.

#5 Auburn is the clear favorite in Game 4 facing #12 Kentucky as the higher seed. This matchup is another past weekend regular season series continued, however. Kentucky took two out of three games in Lexington. The Wildcats will want to keep this momentum going, this time it is away from home. Coming into the night, all of Kentucky’s top arms will be available for the mound.

The first day of the SEC Baseball Tournament will consist of four games, all single-elimination. The winner of each matchup will compete Wednesday, May 25th, in double-elimination rounds facing #3 Arkansas, #2 Texas A&M, #1 Tennessee, and #4 LSU.

5: The Winner of  Georgia and Alabama will face #3 Arkansas

6: The Winner of Florida and South Carolina will face #2 Texas A&M

7: The Winner of Vanderbilt and Ole Miss will face #1 Tennessee

8: The Winner of Auburn and Kentucky will face #4 LSU

A 2022-2023 sophomore at the University of Florida, Madison is studying Journalism, Sports and Media, with hopes to one day become a reporter and journalist. Madison graduated from IMG Academy in 2021, where she competed as a student-athlete running Track and Field. Madison loves all things sports and all things Gators!
@@madiwalkerr
Previous Eastern Conference Finals going back-and-forth between Heat and Celtics
Next Lightning sweep Panthers, Vasilevskiy shines

After a loss to Texas A&M on Thursday, Gators baseball beat Arkansas 7-5  to stay …