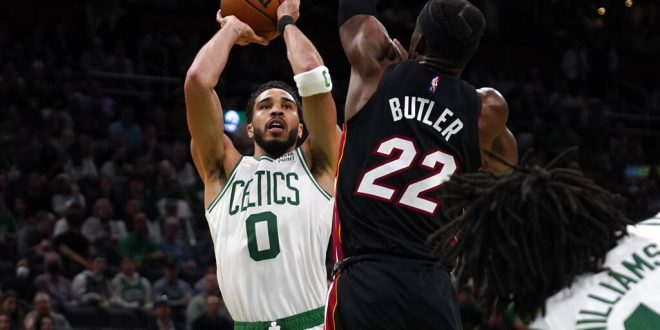 The Eastern Conference Finals series between the Miami Heat and the Boston Celtics has been back-and-forth up until this point. Now, the series is knotted up two games a-piece after a 102-82 Game 4 Boston victory.

The Boston Celtics defense was the story in Game 4. Boston held the Heat to 11 points in the first quarter, the lowest point total in the first quarter in their team’s playoff history. Miami Heat head coach Erik Spoelstra discussed how their poor start hurt them.

The Celtics held the Heat to 33.3% from the field. Jimmy Butler was held in check to only 6 points on 3-14 shooting from the field. Al Horford blocked four shots. Robert Williams III, who came off of injury, blocked two shots in 18 minutes.

HORFORD SENDS IT TO CAMBRIDGE pic.twitter.com/pnSnX257f4

Celtics star Jason Tatum lead the Celtics offense, scoring 31 points. He made 14 free throws on 16 attempts. Attacking the basket seemed to be a focal point for Tatum after he only shot four free-throws in Game 3.

Injuries have played a large role in the series as well. Sixth Man of the Year award winner Tyler Herro was out with a groin injury for Game 4. After suffering an ankle injury in Game 3, Marcus Smart was also not available for Game 4. Kyle Lowry, Al Horford, Derrick White and Robert Williams III have also missed time in the series. Availability will be key in seeing who advances to the NBA Finals.

In a best-of-7 playoff series, when a series is tied 2-2, the team that wins Game 5 has gone on to win the series 82.2 percent of the time. The Heat are looking to bounce back on offense, while the Celtics are looking to bring the same defensive focus to Game 5.

Previous The Rise of Ruth: Analyzing How Neil Ruth Has Made Himself A Household Name In Oak Hall’s Clubhouse
Next The Start of the SEC Baseball Tournament