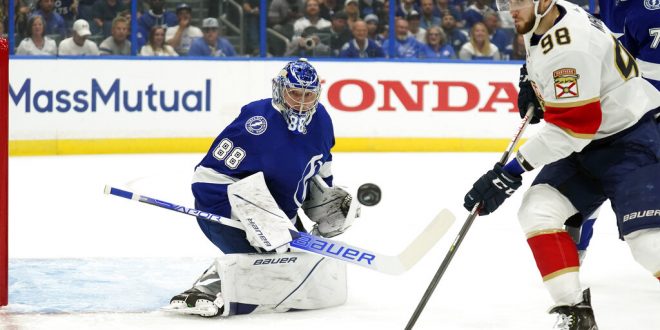 Tampa Bay Lightning goaltender Andrei Vasilevskiy (88) makes a save on a shot as Florida Panthers center Maxim Mamin (98) goes or the rebound during the first period in Game 4 of an NHL hockey second-round playoff series Monday, May 23, 2022, in Tampa, Fla. (AP Photo/Chris O'Meara)

The Tampa Bay Lightning are officially one round away from securing their third Stanley Cup Final appearance in the past three years. With a shutout in the final game of the second round, the Lightning completed a 4-0 sweep to clinch the Eastern Conference Finals.

Andrei Vasilevskiy has carried Tampa Bay throughout the round, making an astounding 49 saves just Monday night. Vasilevskiy has only allowed three goals the entire series and stopped the last 88 shots. During the 2021-22 playoffs thus far, Vasilevskiy has a GAA of 2.22 and a save percentage of .932.

Panthers Fall Short to the Lightning

The Florida Panthers unanswered defeat in Round 2 was unexpected. Their loss to the Lightning on Monday night now makes them the second NHL President’s Trophy winning team in four seasons to have their season end due to a sweep, the other being the Lightning in 2019.

The Panthers were also the highest scoring team during the regular season with 337 goals, but only managed to make three over the course of the second round.

The Panthers outshot the Lightning 49-25 on Monday, but failed to score a single goal.

In Game 1, Corey Perry made the first goal for the Lightning with an assist from Nikita Kucherov in the second period. They picked up the pace in the third period, with goals from Pierre-Edouard Bellemare, Kucherov and Ross Colton.

In Game 2, Perry and Colton both secured their second goals of the series, one in the first period and one in the third period.

In Game 3, the Lightning picked up the pace and packed away five goals, two coming from Perry and Kucherov again. Erik Cernak and Steven Stamkos provided the final three goals to end the game 5-1.

In the final game, the scoring began well into the third, but once again Tampa came out victorious. Maroon clinched the first goal six minutes into the third period, followed by Ondrej Palat’s empty-netter with less than 30 seconds left on the clock.

The Tampa Bay Lightning will take on the winner of the series between the Carolina Hurricanes and the New York Rangers. The series is currently at 2-1 Carolina, game 4 will be played Tuesday night.