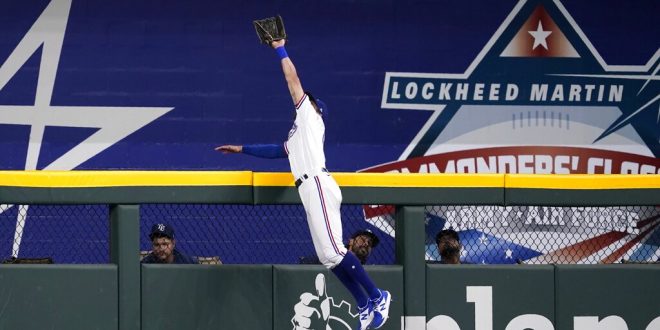 Texas Rangers center fielder Eli White leaps to the top of the wall to catch a flyout by Tampa Bay Rays' Ji-Man Choi in the first inning of a baseball game, Monday, May 30, 2022, in Arlington, Texas. (AP Photo/Tony Gutierrez)

Rays look to bounce back in second game against Texas Rangers

The Rays (28-20) look to tie the series against the Texas Rangers (23-24) after a 9-5 loss yesterday in an exciting game where Eli White made a potential catch of the year robbing Ji-Man Choi of a three-run home run in the first inning.

The Rangers are on a five-game winning streak at home and have won five out of our last six games. Although, the Rays have been positive on the road this season with an 11-9 record.

Tuesday night’s pitching matchup has Ryan Yarbrough on the mound for Tampa in a bullpen game against Martin Perez for Texas. Perez has started this season off hot with a 1.60 ERA and a 0.99 WHIP in 56 innings pitched. Yarbrough has started off with a 3.98 ERA with 20 innings pitched and a 4.76 ERA in away games so far.

The catcher for the Rangers Mitch Garver has been swinging a hot bat at home as well with a .293 batting average. He has been a base hit machine for this Rangers team who ranks 20th in hits this season.

As for Tampa, Manuel Margot has been fantastic on the road batting .455 in away games. He has been fantastic leading off for the Rays especially when they have been dealing with some key injuries to Brandon Lowe, Wander Franco, and Kevin Kiermaier

The Rays are in a tight AL East race only five games behind the New York Yankees who have lost their last two games in a row.

Texas looks to make up ground in the AL West coming into this game in third place, seven games behind the Houston Astros who are 31-15 on the season.

Not our night. Back at it tomorrow pic.twitter.com/SlM6xZbZgr