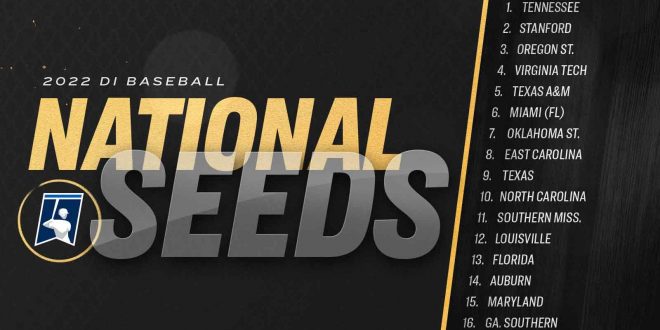 The NCAA Baseball Tournament is set. 9 SEC teams are representing the conference in the Regionals. (Photo from @NCAABaseball on Twitter)

Out of a field of 64 teams, nine from the SEC have been selected to compete in the 75th 2022 NCAA Baseball Tournament. For four consecutive tournaments, at least nine SEC teams have received a bid. The Atlantic Coast Conference is the only other conference sending nine of its teams to regionals.

Four of the nine SEC teams have been named regional hosts. Auburn, Florida, Tennessee, and Texas A&M will each host one of the 16 regionals. The other SEC teams competing include Arkansas, Georgia, LSU, Ole Miss, and Vanderbilt.

For the first time in program history, Tennessee has been named the No. 1 overall seed in the NCAA Tournament with the top-ranking batting average (.308) and ERA (2.35) in the SEC. With a 53-7 (25-5) on the season, the Volunteers will host the Knoxville Regional. Coming off its first SEC Tournament championship title since 1995, Tennessee will rely on its elite pitching staff to shut down Alabama State, Campbell, and Georgia Tech. Right-handed redshirt junior Ben Joyce made waves during the regular season for the Vols being known as one of the hardest throwing pitchers in collegiate baseball. Joyce holds the record for the fastest pitch in college baseball history at a whopping 105.5 MPH.

For everyone asking, this was the Ben Joyce pitch that was clocked at 105.5 mph on our @Yakkertech system. As you'll hear in the clip, the stadium gun registered it at 104 mph. Unreal stuff.#GBO // #Gas pic.twitter.com/wQfgp1H6HA

After breaking a 14-season NCAA tournament streak last year, Texas A&M has rebounded with a No. 5 seeding for 2022. The Aggies (37-18, 19-11) are hosting the College Station Regional against TCU, Louisiana, and Oral Roberts. TCU claimed the Big 12 regular-season title and Louisiana won the Sun Belt Tournament, while Oral Roberts is coming off winning its 20th Summit League championship. Being one of the top 8 national seeds, if Texas A&M wins its regional, they’re locked in to host Super Regionals.

After finishing as runners-up in the SEC Tournament, Florida (39-22, 15-15) emerged as the No. 13 seed nationally and is hosting the Gainesville Regional. The Gators hosted regionals last season only to suffer defeat by South Florida and South Alabama ending their post-season run. UF has amassed much of its offensive production for the 2022 season from the long ball. Florida has recorded the second-most home runs in the SEC totaling 110 led by sophomore Wyatt Langford with 23. After a bumpy 2022 regular season, Florida has won seven of its last 10 games. Liberty, Central Michigan, and Oklahoma head to the Swamp looking to advance to Super Regionals.

The Auburn Tigers (37-19, 16-13) were selected as the 14th seed and will host its first regional since 2010. Head coach Butch Thompson has led the Tigers to four tournament appearances in his seven seasons with the program. Auburn last made it to the College World Series in 2019. The Auburn Regional is hosting UCLA, Florida State, and Southeastern Louisiana.

Arkansas (38-18, 18-12) is heading to the Stillwater Regional hosted by No. 7 seed Oklahoma State. The Razorbacks are tied for second in the SEC West Division and earned an at-large bid into the tournament. OSU will make its 47th regional appearance in program history for the first time in O’Brate Stadium. Grand Canyon and Missouri State are also heading to Stillwater in hopes of continuing their postseason runs.

Georgia has redeemed itself after not earning a spot in the 2021 regionals. The Bulldogs (35-21, 15-15) will make a trip to the Chapel Hill Regional hosted by No. 10 North Carolina. Georgia’s pitching staff has been riddled with injuries, entering regional play with just two of their regulars in rotation with junior Jonathan Cannon and sophomore Liam Sullivan. UNC claimed the ACC Championship title and has picked up 15 wins of its last 17 played. Hofstra and VCU are the two others making the trip to the Tar Heel State.

We will be the No. 2 seed and face VCU on Friday.#GoDawgs pic.twitter.com/9CZ4C4aUkV

LSU secured a spot in the Hattiesburg Regional. Historically, the Tigers haven’t been successful in post-season play on the road. LSU has never made it to the CWS needing to win both a regional and super regional away from home. LSU freshman outfielder Josh Pearson went 5-5 with a home run to help the Tigers pick up a win in the SEC Tournament over Kentucky. The freshman has proven he can perform on the road and paired with a .969 fielding percentage on the season, LSU will rely on the freshmen to help produce runs. For the third time in program history, No. 11 seed Southern Mississippi is hosting. Kennesaw State and Army round out the Hattiesburg Regional.

Ole Miss (32-22, 14-16) held on to be named the final team entering the NCAA Tournament. The Rebels just made the cut after a tumultuous season. Ole Miss began its season 13-1 with the No. 1 ranking in the country before losing 16 out of its last 25 games. The Rebels will compete in the Coral Gables Regional with host No. 6 seeded Miami, along with Canisius and Arizona.

With its first road regional since 2018, Vanderbilt will compete in the Corvallis Regional. The Commodores (36-21, 14-16) will rely on freshman left-handed pitcher Carter Holton. Holton hasn’t given up a run since April and has pitched 24 consecutive scoreless innings. After a runner-up finish at the CWS in 2021, Vanderbilt will look to defeat New Mexico State, San Diego, and host No. 3 Oregon State.