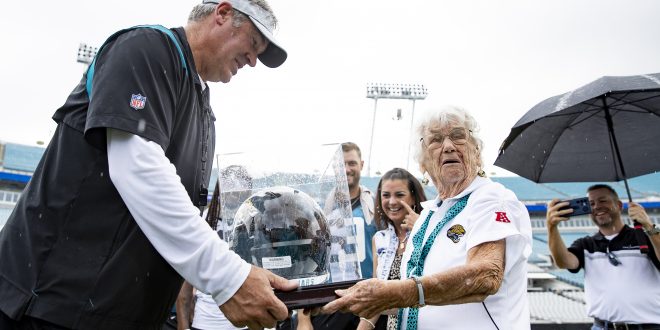 98-year-old World War II veteran Joy Casino visits practice after previously being honored as veteran of the game against Houston on December 19, 2021.

The Jacksonville Jaguars continued organized team activities on Monday. Head coach Doug Pederson invited special guest Joy Casino and her family to watch practice. Casino is a 98-year-old World War II veteran and was previously honored last December as the veteran of the game in a matchup against the Texans.

Casino and guests had the best seats in the house, viewing practice from team owner Shahid Khan’s personal game day suite. Pederson gifted the veteran with a helmet and plaque to commemorate her service and experience with the team. Embraced in many hugs, Casino participated in the final team huddle before practice concluded.

Coach Pederson addressed Josh Allen’s dependability in his defensive end role. Allen recorded 10.5 sacks in 2019, the most by a rookie in franchise history, and led all NFL rookies.

The Jaguars added TE Evan Engram through free agency in the offseason. The former first-round pick and New York Giant signed a one-year contract with Jacksonville. Pederson has watched Engram’s performance in practice to best identify how to utilize his skill set.

Engram spent his four-year collegiate career at Ole Miss. He made 162 career receptions for 2,320 yards. In his last season with the Rebels, he completed 65 receptions and eight touchdowns to earn the Cornely Trophy. Lawrence complimented Engram’s speed and detailed the versatility of the TE room.

Jaguars looking toward next season

The Jags finished last in the AFC South last season and finished with a lousy record of 3-14. Looking forward to the 2022 season, Jacksonville signed wide receivers Christian Kirk and Zay Jones, along with guard Brandon Scherff. Lawrence is now encouraged by the offensive game plan and collaboration he’s seen take place within the organization, after a treacherous rookie season. Lawrence praised the offensive leadership.