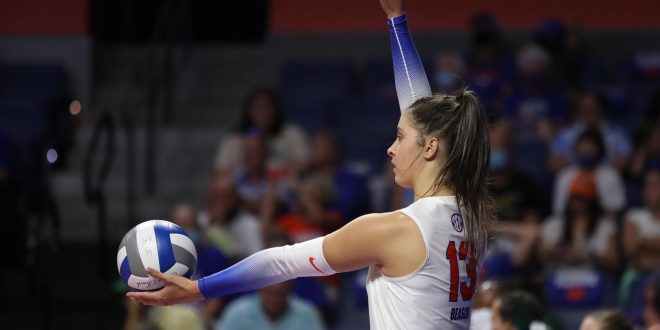 Three Gators Volleyball players have been selected to represent Team USA in the Pan American Cup. (Photo from floridagators.com)

Three Gators Volleyball players have officially been selected to represent USA’s U21 team at the Pan American Cup.

Merritt Beason, Bre Kelley, and Alexis Stucky have been selected to join the 12-woman roster and will be heading to La Paz, Mexico, to compete at the Pan American Cup, which takes place on June 7 and ends on the 12th.

The Dominican Republic won the 2021 Pan American Cup. Mexico was the runner-up and the United States placed third.

Team USA will go up against Costa Rica in the first round on June 7th at 5 p.m.

This is the second time that Stucky is part of the official Team USA roster as she was on the 2021 Youth National 18U Team where Team USA won bronze at the FIVB World Championship in Mexico.

Stucky has had various accolades; before starting her first year at the University of Florida, she was named the 2021 Under Armor All-American MVP. Despite not having any action this season, she finished her high school career with 1,378 kills, 1,004 digs, 201 blocks, and 157 aces.

Merrit Beason will take over the Gators Volleyball Instagram story, to document her experience during the Pan American Cup.

Be sure to head over to our Instagram story as @merbson takes over while at the Pan American Cup! https://t.co/7TmstvDGAT#GoGators pic.twitter.com/dwZH97hBpa

Cristina Santiago is a senior at the University of Florida studying journalism with a concentration in sports and media.
@https://twitter.com/CristinaEspinet
Previous Jacksonville Jaguars are optimistic after OTA on Monday
Next NCAA Baseball Super Regionals Field