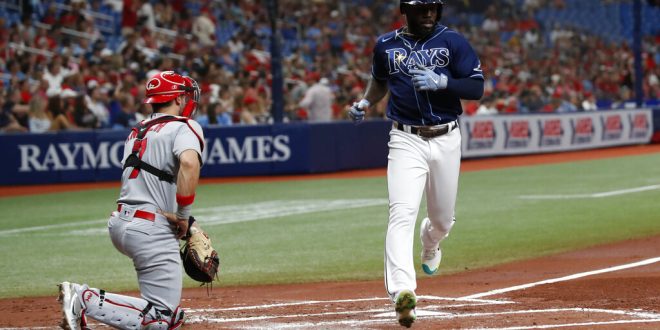 Rays Look For The Sweep Against Cardinals

The Tampa Bay Rays look to sweep the St. Louis Cardinals in the final game of the series.

The Rays have had the Cardinals’ number all series as they took game one 4-2, and game two in spectacular fashion, 11-3.

Game one took some late-game heroics by the Rays.

After seven scoreless innings by St. Louis pitcher, Dakota Hudson, he was relieved by Giovanny Gallegos for the bottom of the seventh.

Manuel Margo started things off with a double to center. After a Kevin Keirmaier ground out, Margo advanced to third and it set up Isaac Paredes.

Paredes hit a sacrifice fly to center field and allowed Margo to break the scoreboard first.

The Cardinals answered back quickly.

After a walk by Lars Nootbaar and a pair of singles by Tyler O’Neill and Harrison Bader, the score was knotted up at one.

The Cardinals struck first in the top of the tenth after a sacrifice fly and took a 2-1 lead.

The Rays answered back in dramatic fashion after a Paredes walk and Brett Phillips fielder’s choice.

Taylor Walls stepped up and launched a three-run walk-off home run to right field to defeat the Cardinals.

Game two was all Tampa.

Packy Naughton for the Cardinals stood no chance against the Rays who started off insanely hot. He went 1.1 innings giving up five hits and four runs in the loss.

Margot highlighted the Rays offense with four hits in five at-bats. Randy Arozarena also added to the offensive assault as he had three hits and drove in four runs.

After a having a 5-0 lead going into the fourth inning, the Cardinals decided to make it interesting. They picked up one run in the fourth and two more in the sixth to make it a 5-3 game.

Tampa would have none of it however. They came back in the bottom of the sixth and scored three more starting with a Walls double and ended with an infield single by Vidal Brujan.
Korey Kluber went five innings giving up six hits, three ER and striking out five.

The Rays didn’t get enough in the sixth inning and decided to run up the score a little more by adding three more in the bottom of the seventh.

Tampa walked away with a menacing 11-3 victory.

Now, the Rays are looking to complete the sweep in game three.

Shane McClanahan is the probable starter for the Rays. He has had a dominant season with a 6-2 record and a 2.10 ERA and 89 strikeouts.

On the other side, Miles Mikolas will look to keep Tampa in check. He comes in with a record of 4-3  and an ERA of 3.02.

The Cardinals look to move back to .500 for the Month of June as the Rays have won five of their seven games this month.