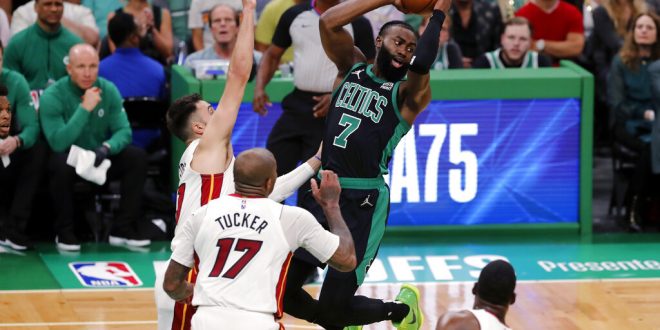 Boston Celtics' Jaylen Brown (7) passes off in front of Miami Heat's P.J. Tucker (17) during the first half of Game 6 of the NBA basketball playoffs Eastern Conference finals Friday, May 27, 2022, in Boston. (AP Photo/Michael Dwyer)

Celtics Pull Away Late to Take Game 3 Against Warriors

The Boston Celtics defeated the Golden State Warriors 116-100 Wednesday night, in Game 3 of the NBA Finals to take a 2-1 series lead.

The Boston Celtics were led by the trio of Jaylen Brown, Jason Tatum, and Marcus Smart in game 3. Brown led the team in scoring with 27 points on 9-16 shooting from the field with four threes. Tatum displayed his improved playmaking ability with a game-high nine assists. He also scored 26 points for Boston. Defensive player of the year, Marcus Smart contributed on the offensive end with 24 points. The trio combined for 77 points, which was the most by a Celtics trio in a Finals game since 1987, per StatMuse.

Big man Robert Williams III blocked four shots for the Celtics. When he is healthy he puts in strong minutes for Boston. Udoka discussed his importance on the defensive end for the team.

The Warriors were outrebounded 31-47. Boston had 15 offensive rebounds, while Golden State had six. The Warriors allowed 52 points in the paint to the Celtics compared to the Warriors’ 26. The Dubs allowed 22 second-chance points as well. Warriors head coach Steve Kerr felt that second chance points played a large part in Game 3.

Steph Curry led the offensive charge for the Warriors. He had 31 points and made six threes. Klay Thompson had his best game of the finals so far. He had 25 points including five triples. Draymond Green struggled in game 3. Green fouled out with 4:07 remaining in the fourth quarter. The Dubs’ defensive anchor finished with two points, four rebounds, and three assists. Golden State will need stronger performances from Green if they are to capture their fourth title since 2015.

Curry continued to be targeted on the defensive end by the Celtics. Boston made a point to involve Curry in pick-and-roll action. He picked up four fouls by the end of the game as a result. Kerr was not surprised by Boston looking to attack Curry on the defensive end.

The Celtics took game one in San Francisco. Despite Tatum scoring 12 points, Boston emerged with a 120-108 victory. Al Horford led the charge for Boston in game 1 with 26 points. Golden State bounced back in game 2, winning 107-88. Curry led the way with 29 points. Boston struggled to shoot in game 2. As a team, they shot 37.5% from the field.