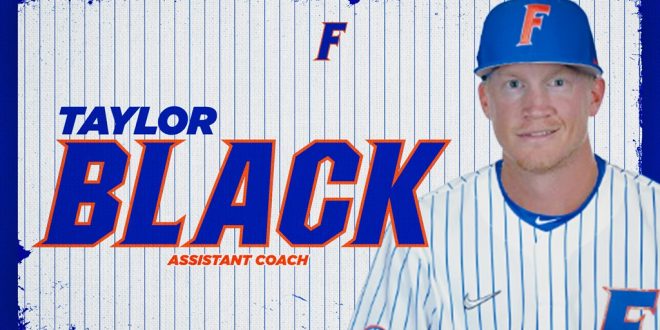 On Monday, Florida Baseball’s Head Coach, Kevin O’Sullivan announced that he has hired Taylor Black as the new assistant coach.

Prior to coaching, Black played collegiately for the University of Kentucky Wildcats. In his two years as a Wildcat Black started 110 of a possible 111 games for Kentucky. He played as the team’s starting shortstop. Black made 15 home runs, 22 doubles, two triples, 87 runs, 24 stolen bases, 75 RBI, and a batting average of .297.

Coming out of Kentucky, he was the 16th-round draft pick. During his professional career, Black played for the Philadelphia Phillies, the Williamsport Crosscutters, and the Evansville Otter.

Taylor Black obtained a lot of NCAA coaching experience before moving to MLB. He was on North Carolina State’s coaching staff for four seasons (2014-2017). During his time at North Carolina State, the Wolfpack attended three-straight NCAA Tournaments and went 110-70. Under Black NC State batted .271 over 3 seasons.

After playing for the Philadelphia Phillies, Black also coached for Wilmington Sharks of the Coastal Plain League in 2014. This League is a developmental summer league for a number of college players.

For two years, Black served as a scout for the Detroit Tigers. In September of 2019, he transitioned into the role of East Coast Crosschecker.

On Tuesday, Black had an interview on Sportscene with Steve Russell. During this interview, Black explained why he chose Florida, the importance of making a positive impact on players, and his thoughts on the transfer portal.

Black expressed that coaching at Florida was an opportunity that he “couldn’t turn down.”

He explained that the aspect he misses about coaching is the impact that he could make on a player, not just inside the sport but outside as well. He also misses the opportunity to make a long-lasting relationship with the athletes.

At the end of the interview, Black expressed his thoughts on the transfer portal. He mentioned that the portal allows coaches to have a better opportunity to build the team that they want.