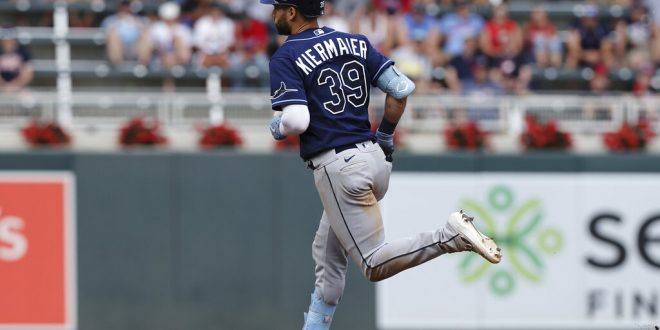 The Tampa Bay Rays are set to take on the New York Yankees in a three-game series in New York. This will be the second meeting between the teams this season. The two teams split the first season series in May.

The series is an important one for the American League standings. The Yankees currently have the best record in the majors and sit in first place in the AL East with a record of 44-16. New York is 9-1 in their last 10 games. They are coming off a three-game series sweep against the Chicago Cubs. Tampa currently sits in third place in the AL East, one game behind the Toronto Blue Jays. The Rays have a record of 35-25 and are 6-4 in their last 10 games. The team is coming off a series loss against the Minnesota Twins.

The series figures to see good pitching from both teams. The first game will feature both Gerrit Cole and Corey Kluber. Cole currently has a 3.63 ERA and 1.07 WHIP on the season. Kluber holds a 3.88 ERA with 1.15 WHIP. Wednesday we will see a battle of the southpaws. Shane McClanahan and Nestor Cortes are set to take on each other. McClanahan leads the MLB in strikeouts (98) and has a 1.87 ERA. He is coming off a scoreless 8-inning outing against the Cardinals.

Cortes has a 5-2 record and is supporting a 1.96 ERA for New York. On Thursday, the teams are projected to start right-handers Drew Rasmussen for Tampa, and Luis Severino for New York.

The Yankees are coming into the series with one of the most potent offenses in the league. The team currently ranks ninth in batting average (.250), third in on-base percentage (.328), third in runs scored (307), first in home runs (98), and first in slugging percentage (.441).

The Yankees have 98 home runs this season, 14 more than the Braves who have the second most in MLB

That 14 home run gap is greater than the gap between teams #2 through #12 on that list pic.twitter.com/DIEiu5rMoC

The first game begins Tuesday night at 7:05 p.m. in the Bronx.