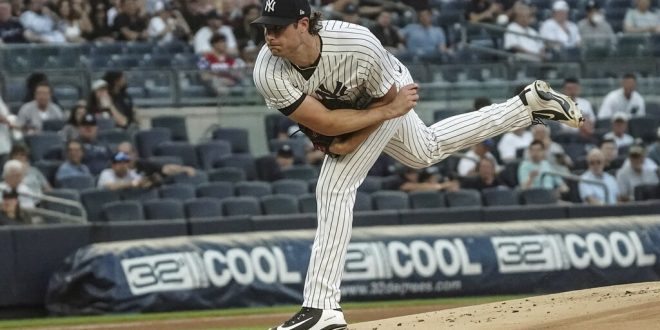 Tuesday night in the Bronx, Gerrit Cole redeemed himself to help the New York Yankees defeat the Tampa Bay Rays 2-0 in the first of three games. The Yankees now extend their lead in the American League East to nine games ahead of the Toronto Blue Jays and 10 games ahead of the Rays.

Since June 1, the Yankees have only lost one game out of 12. They last lost to the Minnesota Twins in game two of the three-game set.

Gerrit Cole seemed to be on fire Tuesday night as he rebounded after the worst outing of his career during the game against the Minnesota Twins on June 9 when he gave up seven runs in 2.1 innings and five home runs. During this game against the Rays, Cole prepared and redeemed himself; he threw seven strikeouts and pitched six shutout innings.

The Rays made two errors during the game which led to the Yankees taking the lead in the score of 2-0. Right fielder, Manuel Margot, of the Rays dropped a Gleyber Torres popup near the foul line; this allowed Giancarlo Stanton to score and Torres to follow him to home after left fielder Randy Arozarena threw a ball that flew high over the catcher.

In total, the Tampa Bay Rays have allowed 40 unearned runs this season so far.

These two teams match up again on Wednesday for the second game of the series. The Rays are looking to tie up the season series at three games apiece. Yankee pitcher, Nestor Cortes, and Rays pitcher, Shane McClanahan, are expected to take the mound.