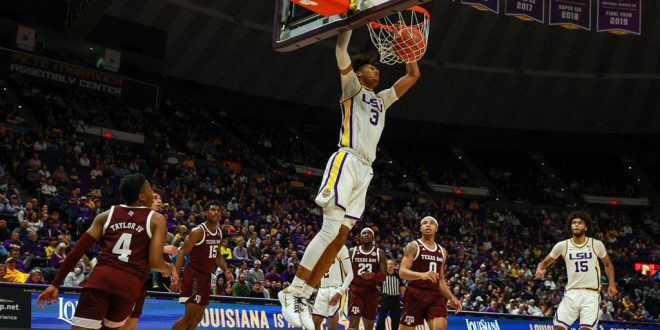 Former LSU forward Alex Fudge is a key piece in Florida’s 2022-23 roster under new Head Coach Todd Golden. The sophomore transfer is ready for the challenge that Gator basketball has in store.

Fudge is a Jacksonville native who is happy to be returning to the sunshine state. He was a four-star prospect who averaged 17.9 points, 12.2 rebounds and 5.7 blocked shots as a senior at Lee High. The 6-foot-9 forward boasts an impressive 7-foot wingspan.

Fudge was part of the class of 2020 and joined LSU in the midst of the 2020-21 season as a redshirt. Fudge was a freshman this past season, recording an average of 3.2 rebounds and 3.3 points with 42.4% shooting in 14 minutes per contest.

However, these numbers do little to showcase the potential that Fudge has to offer. He is considered one of the highest upside transfers by coaches due to his high-level defensive tools. Fudge posted nearly a 6 percent block rate and a 4 percent steal rate.

Golden spoke on the potential the sophomore transfer holds. “He’s already proven to be an impactful defender that makes winning plays and can guard multiple positions. Offensively, we believe he will make a big jump for us getting out in transition more and playing in the middle of the floor in the half-court. We can’t wait to see his growth from his freshman to his sophomore season.”

As an SEC transfer, Fudge has had a prior taste of the competitiveness that SEC basketball offers. From this transition, he has found a great fit with Florida. Fudge speaks on how the transition is currently going.

Fudge adds how his time at Florida is already proving beneficial for him as he works to improve his game. The full support of the coaches and staff has shown to be a big improvement for him as he aims to reach his personal goals. Fudge further details how one of his main goals is to reach 215 pounds from his current 196-pound frame. He speaks about how the coaches and atmosphere at Florida are pushing him to reach his full potential.

Further, as Fudge transitions to Florida, he plans to bring with him the lessons learned from his past Tiger teammates. He speaks on the influence former LSU teammate Tari Eason has on him. Eason was the 17th overall pick in the first round of the 2022 NBA Draft by the Houston Rockets. Fudge explains how his former teammate has provided him with a path he hopes to follow.

Fudge has high hopes for the future of the Florida basketball program. He foresees the team achieving many goals in the season ahead. Fudge believes the team has the opportunity to be SEC contenders and produce an impressive run during March Madness.

“I feel like the Billy Donovan era, we can start that back up. We have the right pieces, coaches, and everybody is on deck,” Fudge said.

The LSU transfer further assesses the opportunities that Gator nation holds for him personally.

The coaching staff is pushing Fudge to gain confidence in his abilities. Fudge speaks on the untapped potential the Florida coaches believe he will bring to the court this season. From his athleticism and long frame, Fudge presents a promising future for the Florida Gators roster.

Ellie is a second-year sports and media journalism major at the University of Florida.
@ellie_shreve
Previous Serena Williams Defeated in First Round of Wimbledon, Is This the End?
Next Gators Basketball SEC Opponents Announced