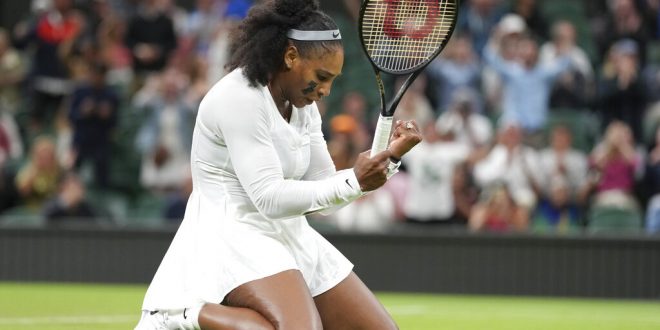 Serena Williams of the US celebrates after winning a point against France's Harmony Tan in a first round women's singles match on day two of the Wimbledon tennis championships in London, Tuesday, June 28, 2022. (AP Photo/Alberto Pezzali)

For the second consecutive year, Serena Williams was defeated in the first round of the Wimbledon tournament.

Yesterday, the 23-time Grand Slam champion was bested in a third-set tiebreaker by Harmony Tan. In her first competitive singles match in 364 days, Williams lost a grueling 7-5, 1-6, 7-6 (10-7) match that lasted for over three hours.

Tan, the No.115-ranked women’s tennis player, made her debut on the main court at the Wimbledon tournament and did not let the nerves of taking on one of the game’s greats overtake her.

Harmony Tan advances to the second round at #Wimbledon after defeating Serena Williams in a three-set thriller‼️ pic.twitter.com/tb9CB96k4T

During her matchup against Tan, the 40-year-old showed signs of rust. She failed to find her rhythm until the fourth game of the match. However, this was her first time competing in the past year, aside from a pair of doubles matches at Eastbourne the week prior.

Once she settled in, Williams showed a few glimpses that reminded fans why she is a seven-time Wimbledon champion. Although she had her moments, lack of repetition and match play proved to be a factor as a lack of consistency plagued her throughout the match.

It seemed as though each time Williams had the advantage, her opponent clawed right back. Ultimately, Tan secured a victory thanks to her conservative style of play that Williams later admitted caught her by surprise.

As she left the court, Williams received a standing ovation from fans in attendance.

After the loss, Williams said that she was happy to play in front of a crowd. She expressed gratitude for the fans after such a long absence due to COVID and her previous injuries.

After a second-consecutive first-round exit from Wimbledon, Serena Williams has yet to announce whether she will play in the 2022 U.S. Open Tournament later this Summer.

Williams has expressed her desire to rebound from this defeat, but she has yet to come to an official decision.

After the loss, Williams said she is motivated to hit the practice courts and return to her winning ways after coming up just short in her first singles match in nearly a full calendar year.