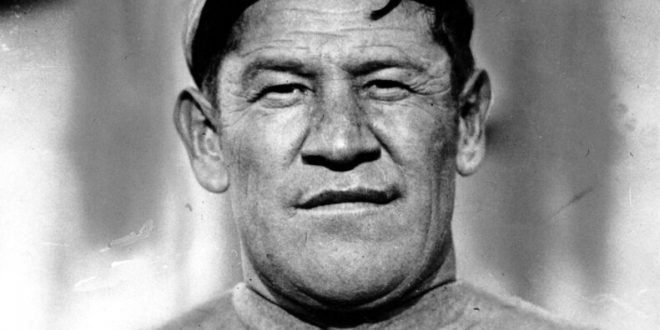 FILE - This is an undated photo of Jim Thorpe in a baseball uniform. Jim Thorpe has been reinstated as the sole winner of the 1912 Olympic pentathlon and decathlon — nearly 110 years after being stripped of those gold medals for violations of strict amateurism rules of the time. The International Olympic Committee confirmed that an announcement was planned later Friday, July 15, 2022. (AP Photo, File)

The International Olympic Committee reinstated Jim Thorpe as the sole gold medalist from the 1912 Stockholm Olympics in the pentathlon and decathlon on Thursday. The IOC stripped Thorpe, who played minor league baseball from 1909-1910, of his medals in 1913 after he broke existing amateurism rules. The reinstatement comes on the 110th anniversary of Thorpe’s gold medal win in the decathlon.

Jim Thorpe (Wa-Tho-Huk), stripped of his 1912 Olympic Gold Medals because he’d been paid to play minor league baseball, was just reinstated as the sole winner of that year’s pentathlon & decathlon by the International Olympic Committee! pic.twitter.com/8BncA5Fz4c

As a member of the Sac and Fox Nation, Thorpe was the first Native American to win a gold medal.

In 1913, it was discovered that Thorpe received a reported $2 per game to $35 per week while playing baseball. As a result, the Amateur Athletic Union removed his amateur status, and the IOC named Thorpe as a professional athlete.

Despite rules that stated that any protests of results must be made within 30 days of the Games’ conclusions, the IOC decided to strip Thorpe’s medals. The decision came despite the findings coming well after the 30-day limit.

In 1982, the IOC reinstated Thorpe’s gold medals following years of lobbying. However, the committee named him co-champion with Hugo Wieslander in the decathlon and Ferdinand Bie in the pentathlon.

Thorpe first came to prominence at Carlisle Indian Industrial School, where he played football for Pop Warner. In 1912, Thorpe led Carlisle to a national championship while playing running back, defensive back, kicker and punter.

The Jim Thorpe Association established the Jim Thorpe Award in 1986, honoring the best defensive back in college football each season.

When the American Professional Football Association’s was formed in 1920 (renamed the NFL in 1922), the charter members named Thorpe the league’s first president, according to Thorpe’s biography on the Pro Football Hall of Fame website, while he continued to play for Canton. Thorpe played with six different teams in the NFL until his retirement at the age of 41 in 1928.

Following his death in 1953, the Pro Football Hall of Fame posthumously inducted Thorpe into its inaugural class in 1963.

Hall of Fame HB Jim Thorpe was born OTD in 1888. Hall of Fame Enshrinement Class of 1963. Considered one of the most versatile athletes of modern sports (Olympic gold medalist, played professional football and baseball). First President of the @NFL. pic.twitter.com/cl8FwzSiKl

Most recently, the National Native American Hall of Fame named Thorpe, who battled racism during his career, to its inaugural hall of fame class in 2018.

The Pro Football Hall of Fame is set to induct eight new members, including former …