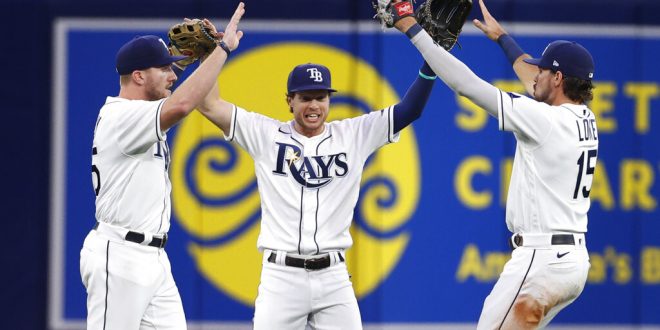 With the MLB All-Star Break just days away, the Tampa Bay Rays, Atlanta Braves and Miami Marlins all look to finish the first half of the season strong against their divisional foes.

With playoff implications on the line, the Rays answered the call as they dominated the Boston Red Sox in a series sweep.  Tampa Bay completed the comeback in the final game of the series, defeating Boston 5-4 at home Thursday night.

The Red Sox appeared to be in control after leading 3-0 after six innings. All-Star Third Baseman Rafael Devers opened the game for Boston with a solo shot in the 4th inning. Jarren Duran and Xander Bogaerts followed with two scoring plays in the sixth.

However, the Rays were able to answer with a huge five-run rally in the 7th inning. Josh Lowe started the rally with a double, allowing Jonathan Aranda to score. Taylor Walls followed with a single, scoring both Christian Bethancourt and Lowe. Yandy Diaz then singled, allowing Brooks Raley and Walls to score.

The Rays’ rally proved to be too much for the Red Sox, despite an RBI double by Alex Verdugo late in the 9th inning. Tampa Bay defeated Boston with a final score of 5-4, completing the series sweep. Tommy Romero picked up the win for the Rays, getting his first win of the season.

After sweeping the Red Sox, the Rays take on the Baltimore Orioles in their final series before the MLB All-Star Break. Both teams are in the heat of the Wild Card race, with the Rays holding the first spot with a record of 49-40.

The Orioles have had a red-hot July; the team is currently on a 10-game winning streak. Tyler Wells will take the start for Baltimore with the team looking to stay hot. Luis Patino will start for the Rays, filling in for Shane Baz who suffered an elbow sprain. Baz will miss at least four weeks.

Both teams square off at 7:10 p.m. Friday in Tampa Bay’s home Tropicana Field.

Braves Bounce Back With Win Against Nationals

Wright finished the night with four strikeouts, two earned runs, and seven hits allowed in seven innings pitched. He picked up his 11th win of the season, which ties for the MLB best on the season.

For the Nationals, Juan Soto extended his hitting streak to 16 games, being one of the bright spots for Washington’s season. Josh Bell and Maikel Franco each homered for the Nats, with Yadiel Hernandez and Soto also scoring. The Nationals fell short to the Braves, losing the game 5-4. Washington sits with an MLB-worst record of 30-61.

On Deck For Atlanta

Atlanta improves to 54-37 on the season, still holding the top NL Wild Card spot heading into the All-Star Break. The Braves sit just 2.5 games behind the New York Mets for the NL East lead.

The Braves continue their series against Washington Friday at 7:05 p.m. in Washington. Ian Anderson will get the start for Atlanta as he faces off Patrick Corbin and the Nationals in game two.

The Miami Marlins defeated the Pittsburgh Pirates 3-2 Thursday night in extra innings. Brian Anderson came in clutch with a two-run triple in the 11th inning to put the game away for Miami.

Anderson was originally ruled to have been hit by a pitch from Pirates pitcher Wil Crowe. After a successful challenge from Pittsburgh, Anderson had to continue at the plate after ruling that the ball had hit the bat first. He then hit a deep drive for a triple, allowing both Jesus Aguilar and Avisail Garcia to score, winning the game for the Marlins.

Braxton Garrett had a strong performance for Miami, throwing 11 strikeouts in six innings. Richard Bleier picked up the win for the Marlins, improving to 2-1 on the season.

For the Pittsburgh Pirates, they fall to 38-52 on the season. Wil Crowe was charged with the loss.

After splitting a series against the Pittsburgh Pirates, the Marlins are set to take on rival Philadelphia Phillies in their final series before the All-Star Break. Cy Young hopeful Sandy Alcantara will take the mound for the Marlins as he looks to cause some damage for the Phillies.

Alcantara currently holds a record of 9-3 with an ERA of 1.73, a WHIP of 0.91, and 111 strikeouts on the season. He will play as an All-Star starter for the National League in the MLB All-Star Game Tuesday night.

The Marlins sit fourth in the NL East with a record of 43-45, just 3.5 games back from the Philadelphia Phillies. First pitch for game one of their series begins Friday at 6:40 p.m. in Miami.