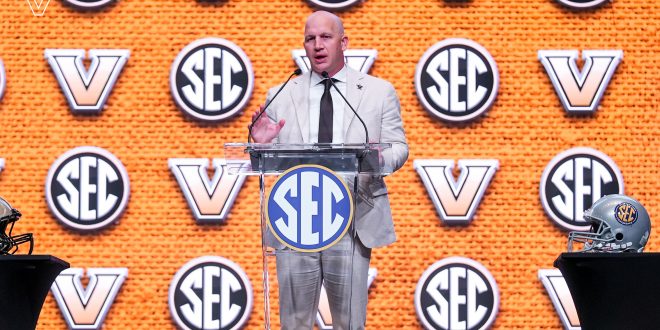 Clark Lea, the head coach of Vanderbilt University’s football team, talked about preparation for the upcoming season and what lies ahead on Tuesday morning during SEC Media Day.

Lea, who is entering his second season with his alma mater, said that he is a father and a husband before he is a coach, and that helps him. Lea had a lot to say about the challenges the program has faced in rebuilding.

Lea says with many outside eyes watching the team and judging where they are in their journey, the team is wholly focused on their future. He says that he welcomes the challenge and that it invigorates the team.

Lea talked about recruiting and working with Barton Simmons, the team’s general manager and head of development, who is also a long-time friend of his. He praised Simmons’ ability to see and project potential in players and his value as a new perspective in the office.

The most important thing to Lea about recruiting for the team is that it’s “defined by our identity,” he said.

He explained that they want to stay as close to what the legacy of Vanderbilt has been while also obtaining players who have a diversity of experience and perspectives. At the core, a player must value education as a fundamental principle to be a part of the team, as it will be a “necessary part” of their time at Vanderbilt, Lea said.

Lea said he’s excited about BJ Anderson’s return from his injury hiatus. He believes he will mesh well with the team, explaining that we’ve already seen flashes of Anderson’s ability when he’s healthy.

He stressed the importance of giving Anderson the room and the ability to grow because he hasn’t had much time on the field. Anderson has never been on the field an entire season and lacks the experience a fifth-year player would have.

“We think BJ has the potential to be a dominant presence at the corner position,” Lea said.

Break-out players Malik Langham and Daevion Davis return this season, with Davis coming off an injury. Langham is a beast on the line and commands respect and special attention from the opposing team. Langham is a former player for the University of Florida until he transferred to Vanderbilt in 2019.

Lea says that everyone has to work every day to earn their spot.

Lea says that their exhibition game in week zero to Hawaii is a challenge on many levels. With many external factors in play other than the performance of the players, like time change and jetlag, it’s hard to prepare. Lea said there is a lot of work to be done in a concise amount of time. He explains that the next month will be monumental to them as a team but realizes that week zero isn’t even part of their season.

He was asked if the trip to Hawaii would be used for anything other than preparation and the game. Lea said that they would use Hawaii as a chance for a remote team-building experience to bring the team closer.