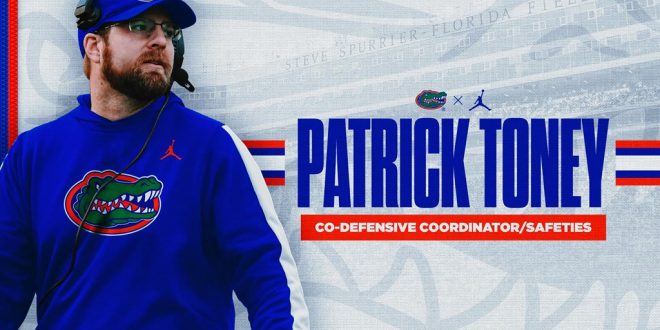 On the defensive side of the ball, the Gators bring veteran leadership to the field in sixth-year senior Ventrell Miller and fifth-year senior Amari Burney. Toney has witnessed Miller step up as the most vocal leader on defense, never shying away from making calls on the field.

Burney leads by example and “handles himself like a professional,” according to Toney.

Despite only being a sophomore, Gervon Dexter Sr. has proven himself as someone who is eager to improve every day by dedicating significant time to the film room. On the field, his versatility and athleticism has shone through as he’s able to move between positions effortlessly. In addition, Toney sees Dexter Sr.’s length as his greatest asset. This is because he’s able to match up well with tackles in the SEC.

Toney’s first priority is having a technically and fundamentally sound defense. One of the main concerns in recent years from the Florida defense has been missed tackles. Toney believes appropriate tackling technique can be emphasized in practice without full contact.

“The biggest aspect of missed tackles in my opinion comes in the approach to tackle. What is my body position? What is my leverage? What is my angle? You can work that on every rep even without going to the ground.”

Everything comes back to fundamentals, according to Toney. He emphasized four critical factors that determine winning vs. losing: exhibiting a solid run defense, limiting explosive plays, executing on critical downs and causing turnovers.

One of those critical downs is third down. In 2021, the Gators posted a 0.358 third down conversion percentage on defense, meaning they stopped opponents on third down 63 times on 167 attempts.

Toney’s defense focuses on contesting the receivers’ routes and putting pressure on the quarterback in order to get off the field on third down.

Physicality and effort are “the brand” of the Gators’ defense, according to Toney.

Napier is known for bringing a physical style of play to the field with all of his teams. According to Toney, the Gators are playing “complementary football,” meaning what they do on offense complements what they do on defense, as well as special teams. Physicality comes into play in all three phases of the game.

The Florida secondary brings depth to the table this year and many players are eager to develop into their specific roles on the team. The secondary is a significant component of Toney’s defensive game plan. Therefore, Toney is planning on a rotation of five, sometimes six, defensive backs on the field most of the time.

As the safeties coach, Toney emphasizes the importance of being detail-oriented. Toney expects senior Trey Dean III‘s focus on precise details in the offseason to translate on the field during the season.

Can Toney’s Defense Flip the Script?

In recent years, the defensive struggles have revolved around penalties. Last season, Florida averaged 70.62 penalty yards per game. With Napier and Toney harping on discipline, time will tell if the Gators can eliminate the costly mistakes under the bright lights of college football.

Florida kicks off its season on Sept. 3 at 7 p.m. against Utah in The Swamp.