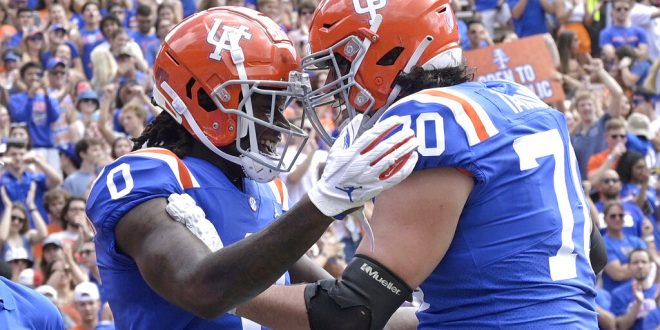 Florida wide receiver Ja'Quavion Fraziars (0) is congratulated by offensive lineman Michael Tarquin (70) after catching a pass in the end zone for a 5-yard touchdown during the first half of an NCAA college football game against Vanderbilt, Saturday, Oct. 9, 2021, in Gainesville, Fla. (AP Photo/Phelan M. Ebenhack)

Although it’s his fourth year in the program, Tarquin is entering the upcoming football season as a redshirt sophomore. The Ocala native appeared in 12 games for the Gators last season. The 2021 Florida offensive line allowed 14 sacks/1.08 per game, which tied for the seventh lowest in FBS.

Tarquin said that playing with familiar faces has resulted in excellent chemistry on the offensive line. In addition, Sale and Stapleton have emphasized the importance of cohesiveness which has contributed to the line’s success throughout fall camp, according to Tarquin.

As one of the more experienced players on the offensive line, Tarquin has embraced his new role as a leader on the team.

Tarquin’s strong leadership qualities have not gone unnoticed. In July, he was named the Danny Wuerffel Man of the Month. The award recognizes a player who has not only demonstrated exceptional leadership, but also character, academics and service.

This award is presented to the scholar-athlete who demonstrates holistic excellence in character, academics, service, and leadership.

Check out the conversation between Danny and Mike! ⤵️ pic.twitter.com/GfUvjeSyNr

Tarquin has also seen quarterback Anthony Richardson take command of the offense during fall camp. Richardson does not shy away from bringing the team together to talk through mistakes and find solutions to eliminate them.

A primary focus this offseason has been discipline. Last season, Florida averaged 70.62 penalty yards per game. Tarquin believes the Gators’ focus on minute details throughout the offseason will translate to success on the field.

With redshirt senior Richard Gouraige sidelined during fall camp, the younger and more inexperienced players have seen the importance of being ready to step in at any moment. Gouraige has been a key contributor on the Florida offensive line the past three seasons.

Sale and Stapleton have emphasized the “next man up” mentality as well. Tarquin praised redshirt freshmen Austin Barber and Kamryn Waites for their preparation heading into the season.

Tarquin is eager to embrace the challenge the Gators have ahead of them this season.

“Part of the reason why I wanted to come play for Florida; you get to play against great competition. Pretty much almost every week you’re gonna go against an NFL-level D-lineman which I love. I love the competition.”

With a season-opener against No. 8 Utah on September 3 in The Swamp followed by a test against SEC East foe Kentucky the following week, the Gators will certainly face tough competition early this season.