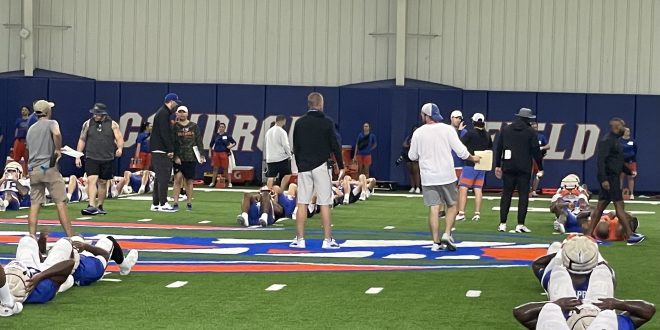 The Florida Gator football team had its first scrimmage of fall camp on Saturday. However, the scrimmage was not open to the media. The media only had the chance to see the team warmup and take part in the regular drills during the viewing period on Saturday before the scrimmage.

Gators Keeping it Simple For the Quarterbacks

There have not been many shakeups for the Gators offense when it comes to projecting the depth chart. Its been known that the quarterback battle will come down to Anthony Richardson and Jack Miller III. Both looked positive and steady on Saturday during the viewing period with some tight spirals and well-aimed throws.

Potential Starters Along the Offensive Line

While it may be a stretch to assume what the starting offensive line will be, during the warmups it seemed the starters led each position row. For example, the quarterbacks were led by Anthony Richardson. So, with this in mind, the potential starting lineup from right to left could be Michael Tarquin at right tackle; O’Cyrus Torrence at right guard; Kingsley Eguakun at center; Ethan White at left guard; Richard Gouraige at left tackle.

Again, take this as you may because this is not the guaranteed starting offensive line. Head coach Billy Napier could just have had them like this for another reason. He could change it up from now until the opener also depending on how the practices go.

There’s not much different from today compared to the previous days. Justin Shorter and Xzavier Henderson led the wide receivers in the drills again and look to be the starters out wide.

The tight ends started the practice by running routes with the wide receivers. The tight ends showed good foot work and good hands during this phase of the viewing period. They will look to have a number of new faces in this room that will be trying to prove themselves this year.

Circling back to the theory about the starter being lined up at the front of each row during warmups, Nay’Quan Wright had been the leader for the running back group. He also began the position group in the drills as well.  However, this should not mean too much as this group should share reps over the course of the season.