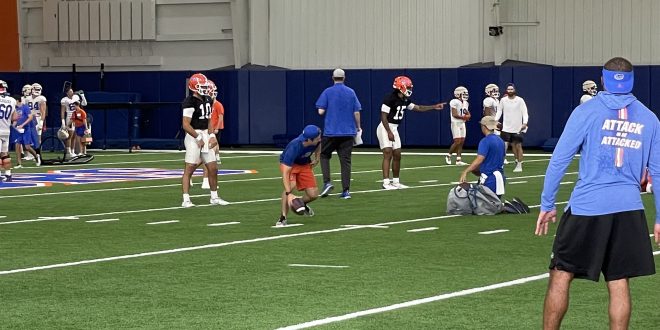 Friday would be the last practice of the week for the Gator football team before its first scrimmage of fall camp on Saturday. With that in mind, here are some notes on the offense before it takes place.

Gators Quarterback and Running Back Play

There should be no surprises come Saturday when the first and second units for the offense take the field. Anthony Richardson and Jack Miller III began in the starting spots in the drills on Friday. Both were throwing quality, tight spirals to the receivers and running backs during the viewing period on Friday.

@GVOaant working with the RBs on flat routes. @B0SSMAN_5 showing great hands out of the back field. pic.twitter.com/NF8aOmkeRf

When it comes to the running backs, the presumed three main contributors for the Gators will be Lorenzo Lingard, Nay’Quan Wright and Montrell Johnson. All three can catch the ball as well as run the ball effectively. These three will look to be a scary three-headed backfield for the Gators this season that will show that they can pound the rock and reel in catches.

Gator Wide Receivers May Still Be A Man Down

While the Gator receiving group will still have Justin Shorter, Xzavier Henderson and Trent Whittemore commanding the group, it looks as if Arizona State transfer Ricky Pearsall may not participate in the scrimmage on Saturday. Pearsall was not seen practicing during the viewing portion.

During Friday’s viewing period, the wide receivers ran multiple different routes on the day. They ran curls, slants, crossing and out routes. In these drills, Justin Shorter and Xzavier Henderson led off.

The tight ends were mostly running through run-blocking drills. Though, they did have a brief period catching passes from the quarterbacks to begin the viewing.

@CoachRobSale working with @RichieLeonardIV and @ElOso72. The offensive line group should be in great shape this year having both coach sale and @darnellru53.

Side note: Ethan White is seen with a non-contact jersey as well. pic.twitter.com/ohOvwWBaHj

Unfortunately for the Gators you can also see that Ethan White is wearing a non-contact jersey. There has not been any information released on his status for the upcoming scrimmage on Saturday.