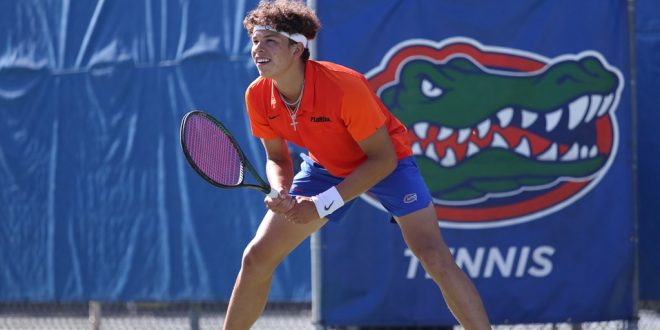 Florida Gator men’s tennis star Ben Shelton is leaving the university to go pro. The NCAA tennis champion announced his decision via Twitter on Tuesday, after receiving a wild card invitation to the U.S. Open.

At just 19 years old, Shelton has forgone his last two years of college eligibility to turn pro. During his time with the Gators, the Gainesville native has made a name for himself among the tennis community. Shelton has brought the Florida men’s tennis program to new heights. He led the Gators to their first-ever national championship, as he won the clinching point as a freshman.

During his sophomore year, Shelton won the 2022 NCAA Singles Championship with a 4-6, 6-3, 6-2 victory over No. 6 August Holmgren of San Diego. He was named the 2022 ITA National Player of the Year, after ending the 2022 season ranked No. 1 in singles. Shelton was awarded as the ’22 SEC player of the year, after going 10-2 in singles and 7-3 in doubles at court one during SEC play.

With four ATP tournaments under his belt, Shelton has made two top 100 finishes during his two seasons playing as an amateur on the ATP Challenger Tour. On Wednesday, Shelton continued his ATP Masters 1000 debut by dominating with a 6-3, 6-3 win against No. 5 Casper Ruud. Shelton made history in doing so.

A Proud Dad and Coach

Florida Gator men’s tennis head coach Bryan Shelton shared his excitement for his son in an interview with UAA Communications.

“Our thought and really our prayers for Ben is that God will continue to guide him, watch over him and bless him throughout the rest of his professional career,” he said.

“It’s bittersweet for me in particular as his college coach here at the University of Florida and his dad,” Shelton said. He spoke about the mixed emotions he feels. “You know it’s sad that he won’t be with us as we battle throughout this season, I won’t have him by my side.”

Despite being sad that his son is leaving the Gators behind, he expressed how proud he is of his son as he takes the next step in his career. Shelton described the passion and dedication his son has consistently displayed to the game during his past two years with the Gators.

“I don’t think there’s a bigger Gator out there than Ben,” Shelton said.

Shelton further spoke about how grateful he is that his son has had the opportunity to learn from an exceptional coaching staff at Florida. He spoke highly of Tanner Stump, Matt Cloer, and Scott Perelman, crediting the trio for contributing to his success.

The coach said his son has “the heart of a lion” and as Shelton begins his professional career. The coach is positive that his son “is going to do extremely well out there”.