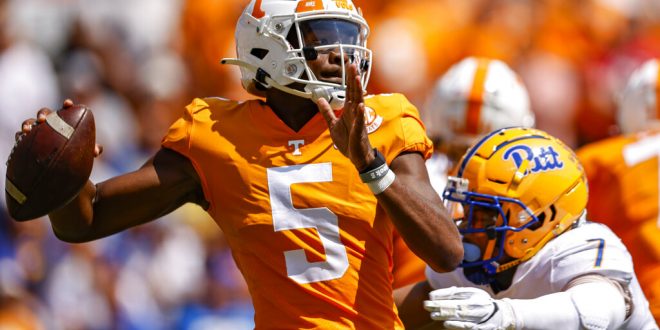 The Akron Zips (1-1) are hoping to pull an upset as they take on the Tennessee Volunteers (2-0) tomorrow night in a college football match up.

Akron is coming off of a brutal 52-0 loss to Michigan State on the road. In their previous game, they lost four fumbles and surrendered 28 points in the third quarter.

As for Tennessee, they are 2-0 after defeating Pittsburgh on the road last week and the Vols are nationally ranked.

In spite of the complete annihilation that took place last week in East Lansing, Akron is still a good football team.

New head coach Joe Moorhead is leading a hungry squad in the midst of a total rebuild. As a former head coach as Mississippi State, Moorhead has had experience coaching in the SEC.

The strength of this team resides in its defense. The unit has recorded three interceptions so far this season, along with four different players recording at least 0.5 sacks. They have been able to force turnovers and get to the quarterback, and they’ll need to make UT quarterback Hendon Hooker uncomfortable if they hope to win.

When it comes to the quarterback position, there is a little bit of uncertainty. After starter DJ Irons went down last week, his status for this prime time match up is in question. Jeff Undercuffler Jr, a 6’5″ gunslinger who played previously at Albany, is expected to get the start.

He’ll certainly have a lot of pressure on his shoulders as he leads Akron’s offense against an undefeated SEC opponent.

After last week’s overtime victory over Pitt, the Volunteers are gearing up to put the SEC on notice.

With a win on Saturday, they would start a season 3-0 for the first time since 2016. Tennessee is the clear favorite in this match up, with a high-powered offense led by senior QB Hendon Hooker. He has thrown for 546 yards and four touchdowns thus far this season, with one of them being the game-winner in last week’s game.

On the defensive side of the ball, the Volunteers are a bit of a work in progress.  However, against Akron, the Vols will face a team whose offensive line has struggled this season, allowing nine sacks in two games. Akron has had issues turning the ball over as well.  Tennessee will look to capitalize on this as they have forced five turnovers so far this season.

Vols coach Josh Heupel says that the team is proud of where there are today. He also mentioned that the program plans on using this game for recruiting, stating that the team should play well on Saturday.

Kickoff is set for Saturday, September 17 at 7:00 PM EST at Neyland Stadium.

Previous Auburn Set for Home Test Against No. 22 Penn State
Next Gator Volleyball Looks to Take Down Defending Champ Wisconsin