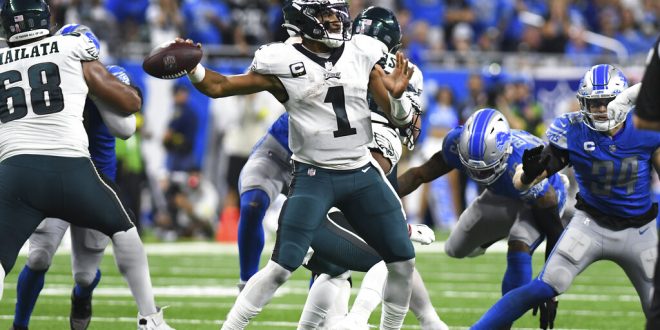 Philadelphia Eagles quarterback Jalen Hurts (1) throws against the Detroit Lions in the second half of an NFL football game in Detroit, Sunday, Sept. 11, 2022. (AP Photo/Lon Horwedel)

The Philadelphia Eagles take on the Minnesota Vikings Monday at 8:30 at the Lincoln Financial Field in Philly. Both teams are coming off wins from Week 1. The Eagles beat the Lions 38-35 while the Vikings beat the Packers 23-7.

In Week 1, the Eagles played an emotion-filled game as they sealed their win against the Lions during the last 50 seconds of the fourth quarter. Jalen Hurts had 333 yards, a touchdown and ran 17 times during the game. During his first game with the Eagles, wide receiver A.J. Brown received 155 yards, making him the first Eagle to receive that many yards in their debut game.

Eagles quarterback Jalen Hurts gave his opinion on how Monday’s game will be challenging because the Vikings have good players in all positions.

New head coach, Kevin O’Connell led the Vikings to their first win of the 2022 season. Justin Jefferson, Minnesota’s wide receiver, took the game by storm with two touchdowns in the first half and had a total of 184 receiving yards by the end of the game. The Vikings’ defense played a powerful game as they held off the Packers from scoring at the goal-line during the second quarter.

Tune into Monday night’s game as the Eagles take on the Vikings in Philly on ESPN 98-One FM, 850 AM WRUF. Kick-off is slated for 8:30 PM and can be viewed on ABC.