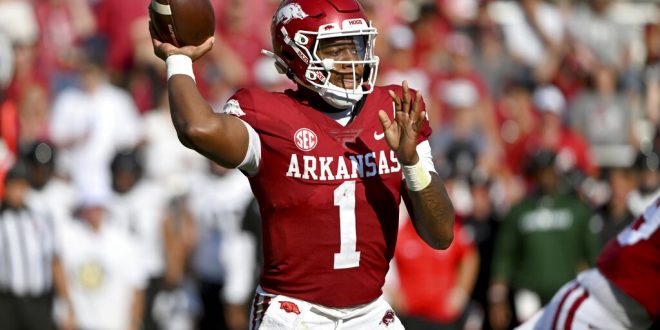 The Arkansas Razorbacks will travel to Arlington for an SEC West matchup against the Texas A&M Aggies on Saturday.

Both teams appear in the AP top 25 rankings this week.  Coming into week 4 undefeated, the Razorbacks rank at No. 10.  Following a home victory against ranked Miami, Texas A&M checks in at No. 23 this week.

They opened their season against No. 23 Cincinnati, where they defeated the Bearcats 31-24 at home.

In Week 2, the Razorbacks opened SEC play with a 44-30 win against the South Carolina Gamecocks.

Last week, they defeated their FCS foe No. 5 Missouri State – the team where their former head coach currently resides.

Junior Quarterback KJ Jefferson is going to give the Aggies defense a run for their money.  Jefferson is averaging 313 total yards a game and has completed 70.5% of passes for 770 yards with six touchdowns and one interception.

Alabama transfer Drew Sanders is tied for the national lead in sacks with 28 with 6 1/2 for loss and 5 1/2 sacks.

The Aggies started their season off strong when they completely shut out Sam Houston with a 31-0 win.

They weren’t able to keep the pace.  In week 2, they were upset by Appalachian State 17-14.

In efforts to get his team back on track in week 3 against the No.13 Miami Hurricanes, coach Jimbo Fisher subbed quarterback Haynes King for LSU transfer Max Johnson; and he did not disappoint.  Johnson threw for 140 yards and a touchdown in his start as an Aggie in front of a crowd of 107,245, which was the third-largest crowd in Kyle Field history and the largest for a non-conference game.

Devon Achane also contributed to the Aggie win with 88 rushing yards and Ainias Smith had four receptions for 74 yards.

The SEC West rivals will meet in Arlington at the AT&T Stadium on Saturday at 7.

Jolie Katzen is a fourth-year Journalism major with a focus on sports media at the University of Florida.
Previous South Carolina VS Charlotte Preview
Next NFL Preview Podcast Episode 3